A (free) walking tour through the center of Amsterdam When you’re abroad it can be quite a challenge to find out where you should go. Every day there are travelers who were planning to explore all touristic sights of Amsterdam, yet somehow never made it past the city square. As someone living in Amsterdam, I figured this couldn’t go on any longer. That’s why I decided to take you all along on a tour through the city center, so you will never have an excuse to get lost in Amsterdam again. 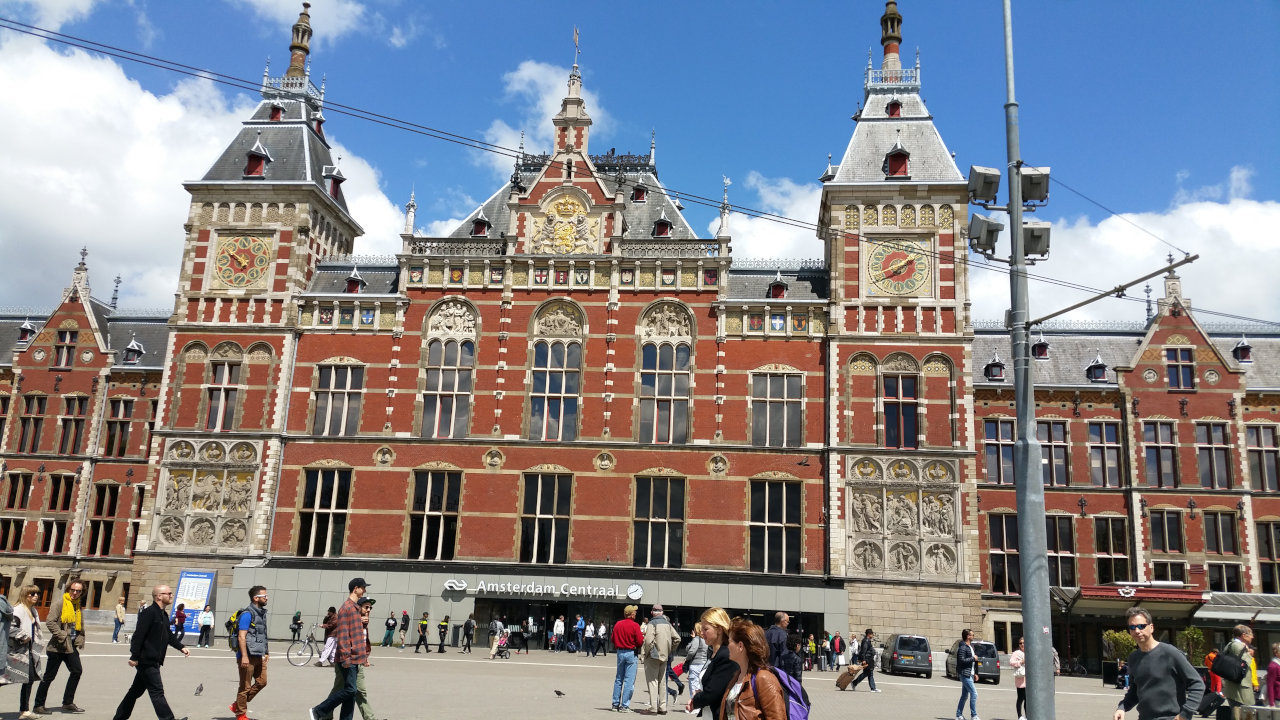 Our journey starts at Amsterdam central station, where every traveler should arrive. It has a direct connection to Amsterdam airport after all. A little known fact is that this station actually stands on an artificial Island. If you walk from the central station to the city center, which is called Dam Square, you pass some large department stores in ancient looking buildings. The style of this architecture is actually called historism. Many buildings in Amsterdam, including the Rijksmuseum, are built in the same style. The building is only over a century old though, so it looks older than it actually is. This store is also secretly one of my favorite places to shop in Amsterdam, as you will find fashion from a large variety of brands here. 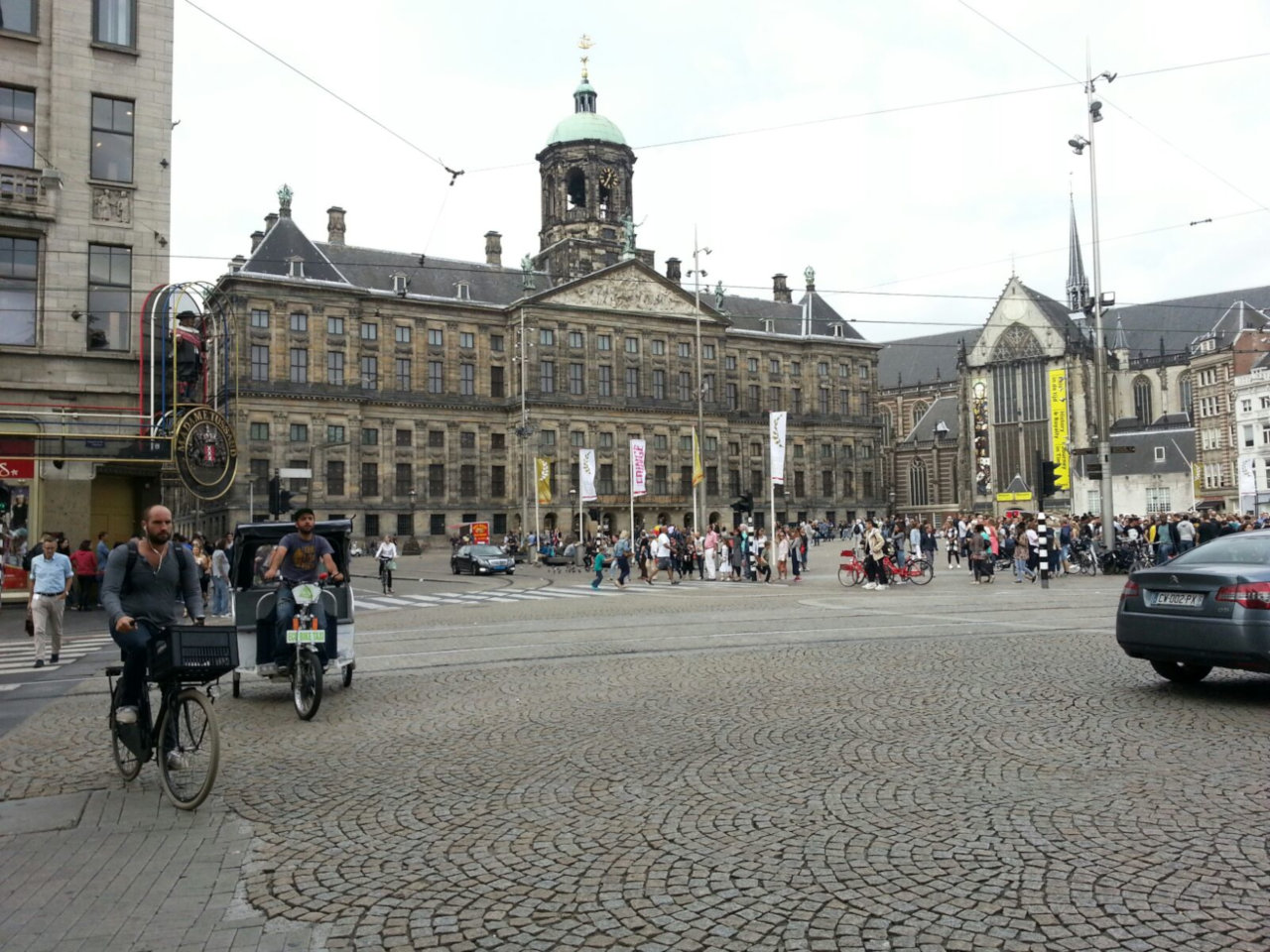 As you arrive on Dam Square you will probably notice two things: a ridiculous amount of doves and the gigantic Royal Palace. When the Netherlands finally became independent of Spain it decided to celebrate its newfound republic by creating the biggest non-religious building in the world. The building was so large for its time, that some even considered it a miracle. Today we see countries like Dubai creating massive structures to show off their wealth to the world, but a few centuries ago the Dutch did exactly the same. Today this building serves as a palace where the King of the Netherlands can receive his guests. 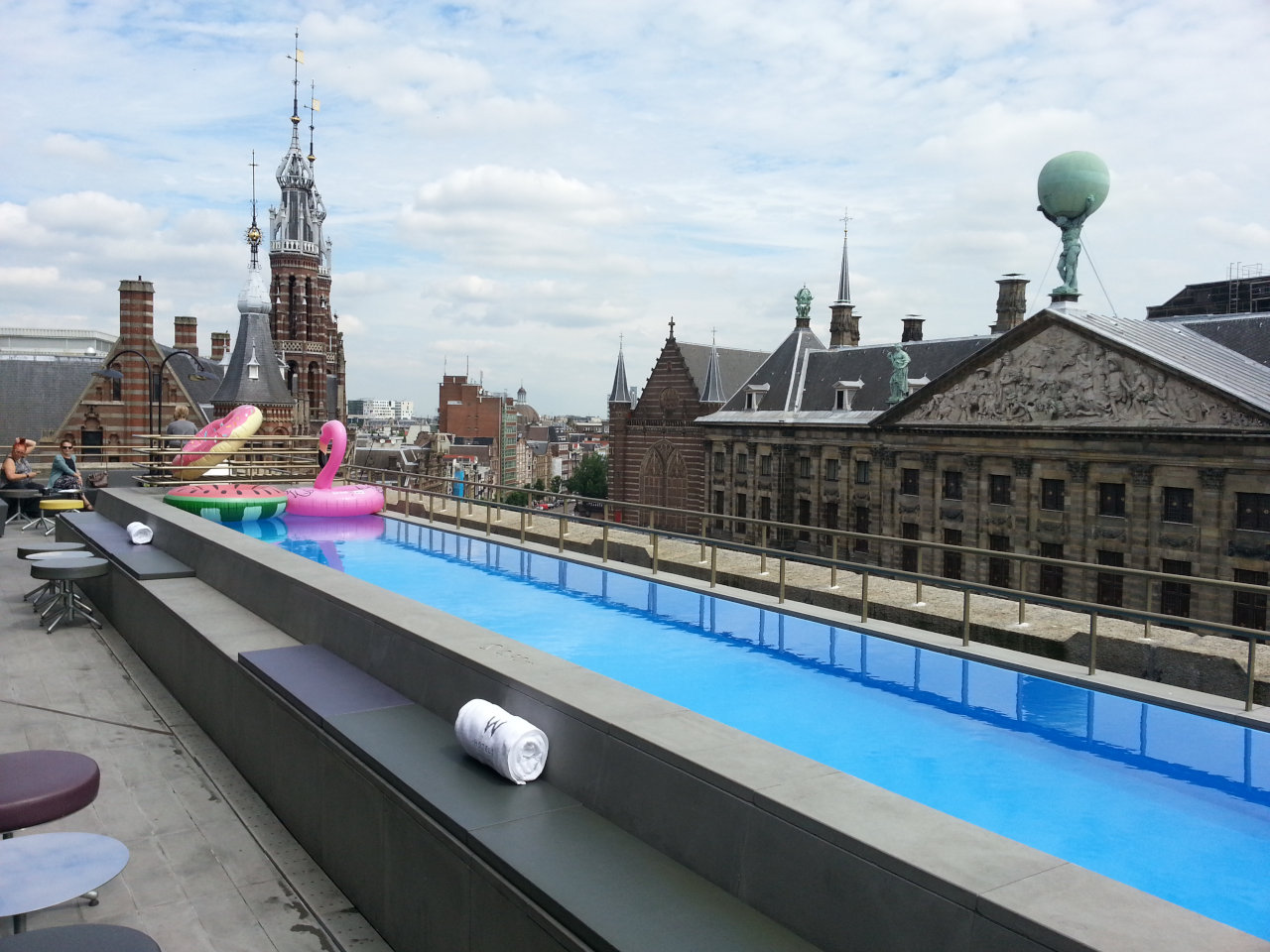 From Dam Square you can go into any direction and find something worthy of note. If you go east, you end up at the famous red light district. Instead of going into any direction of the wind, we decided to go up. Yup, you can go into literally every direction here. We decided to chill at a rooftop bar called the W Lounge. As we quickly learned even the rooftops in Amsterdam are filled with water, as there is even a pool overlooking the Royal Palace. Here you can relax with a refreshing drink while Atlas is carrying the world next to you. Which is only fitting, as the Netherlands is an old maritime nation that used to be burdened with running a global empire. If you go south, you will enter the Kalverstraat. The first real shopping street you will encounter in Amsterdam. It’s filled with tourists and mainstream stores. Interestingly enough we came across a typically Dutch street organ, standing in middle of the road, in front of the WE store. Cheering up the street by playing loud organ music based on modern songs.

The canals of Amsterdam 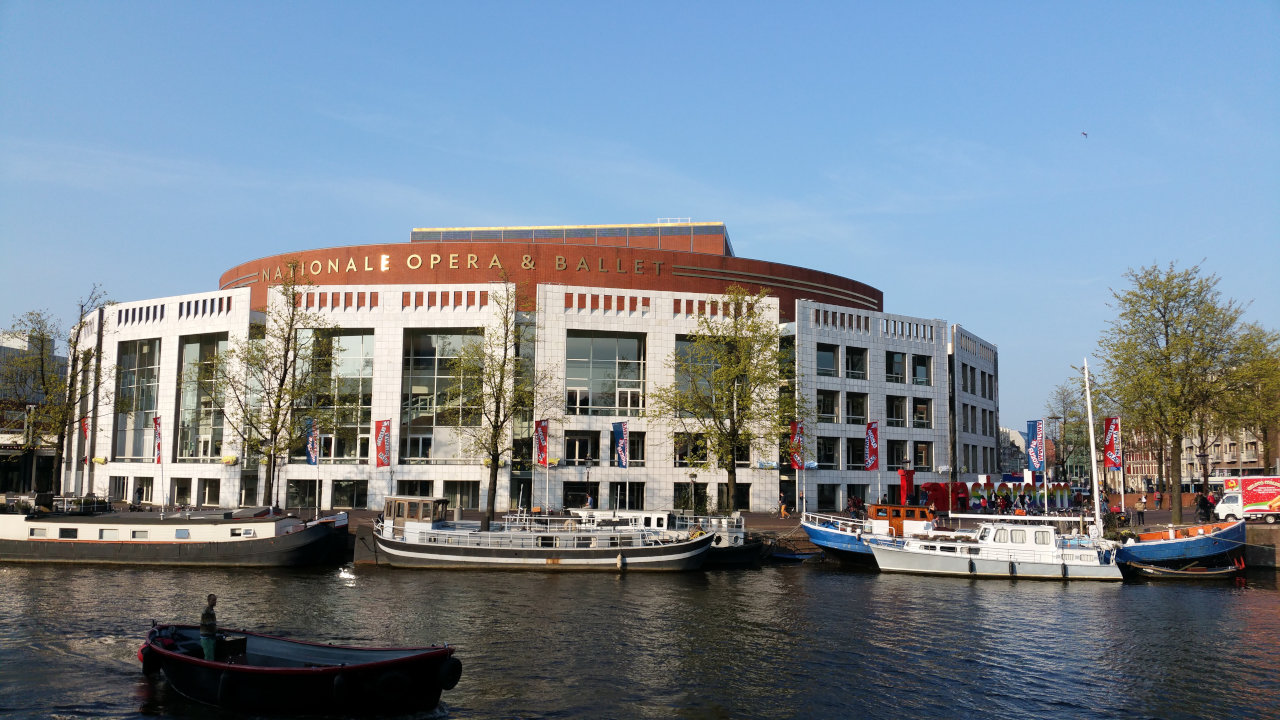 After some long streets filled with shops and tourists, you end up at another crossroads. Going east means you will end up at the Rembrandt Square, where a lot of the nightlife in Amsterdam can be found. Most tourists get stranded at Rembrandt square, because it’s filled with restaurants, movie theaters and so on. If you are looking to have some dinner and perhaps a drink afterwards, then Rembrandt square is the place to be.

A lot of travelers aren’t aware of the fact that if you head slightly further to the east you end up at the most beautiful canals of Amsterdam. Here you will find The National Ballet and Opera in the same building as the city hall. The mark of a city of culture. Amusingly several people have parked their boats in front of the city hall. 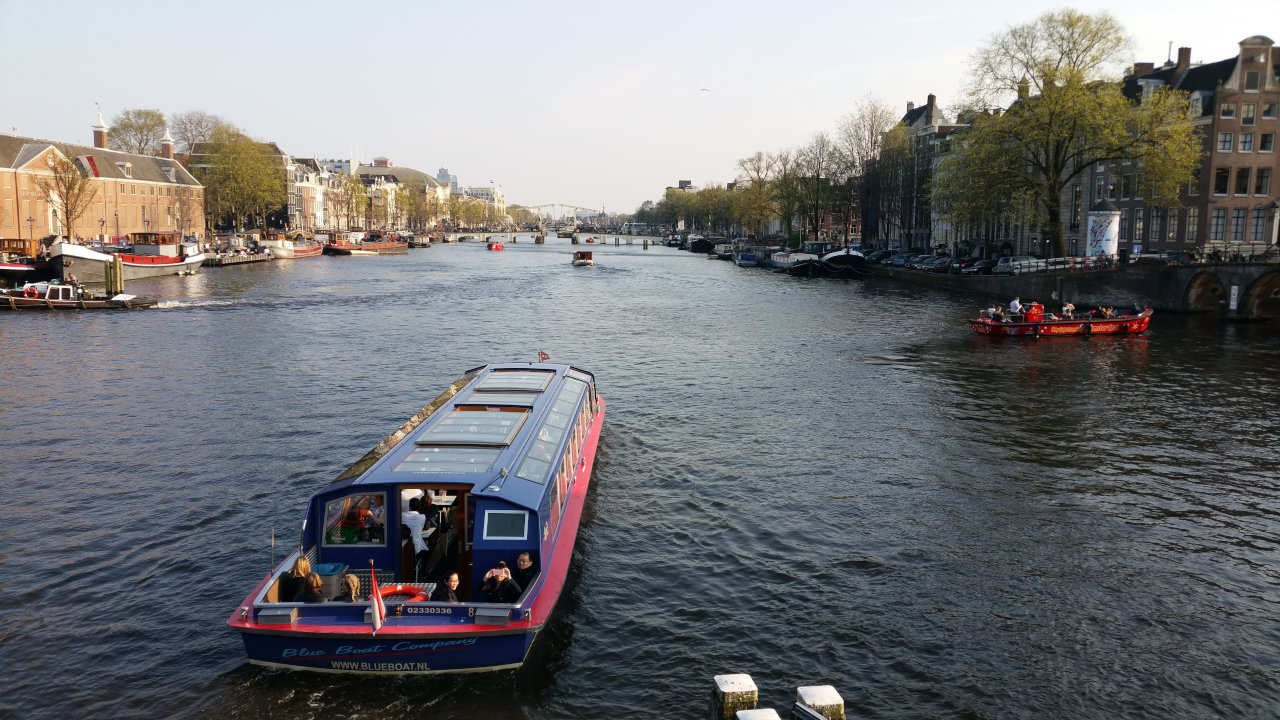 Behind us is the Amstel river, after which Amsterdam is named! Overlooking the Amstel river, we see the Skinny Bridge in the distance, which is probably the most famous bridge in Amsterdam. And the Hermitage museum, on our left hand, which is connected to the famous Russian Hermitage. So my gut feeling says any history buff should check it out. 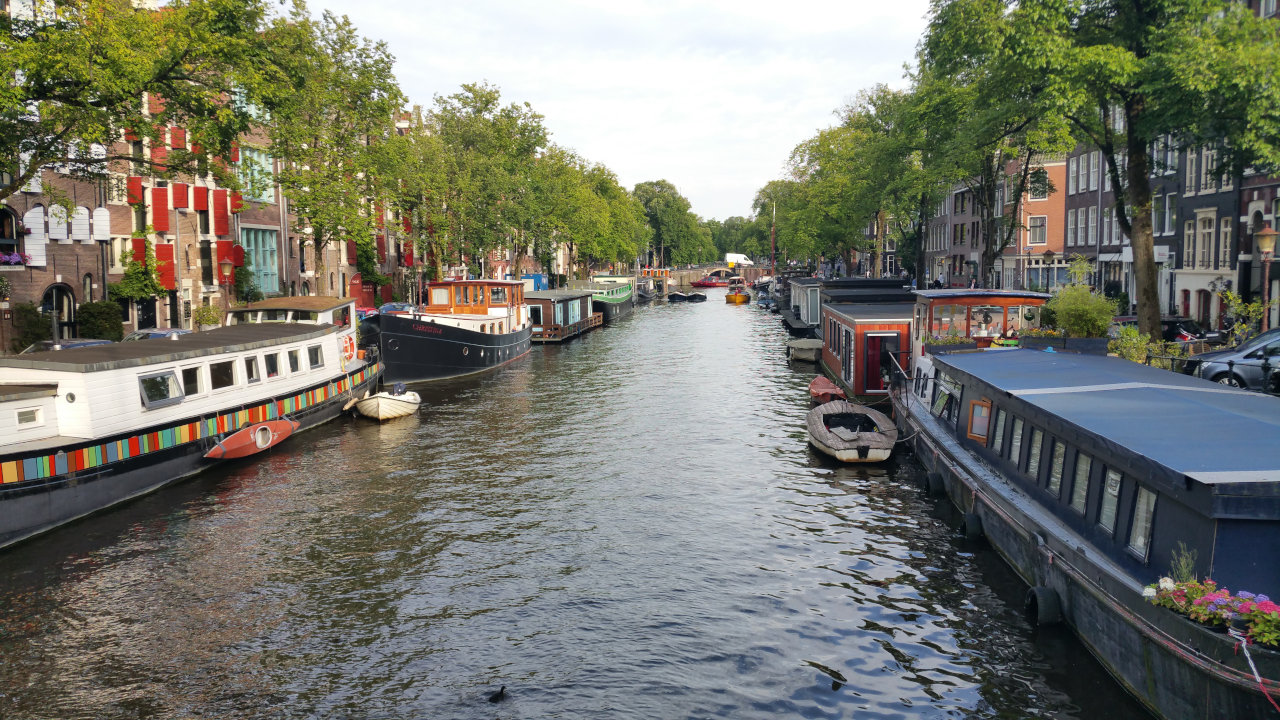 If you head to the south west, you will also come across plenty of beautiful canals. As we cross several canals we can’t help but to notice all the boats. These boats are actually house boats, as many people in Amsterdam actually live on boats. Locals find it romantic to live on a boat in the historical canal rings of Amsterdam. When you live on a boat you always wake up to a great view over the water. These people are truly living the boat life.

The nightlife of Amsterdam 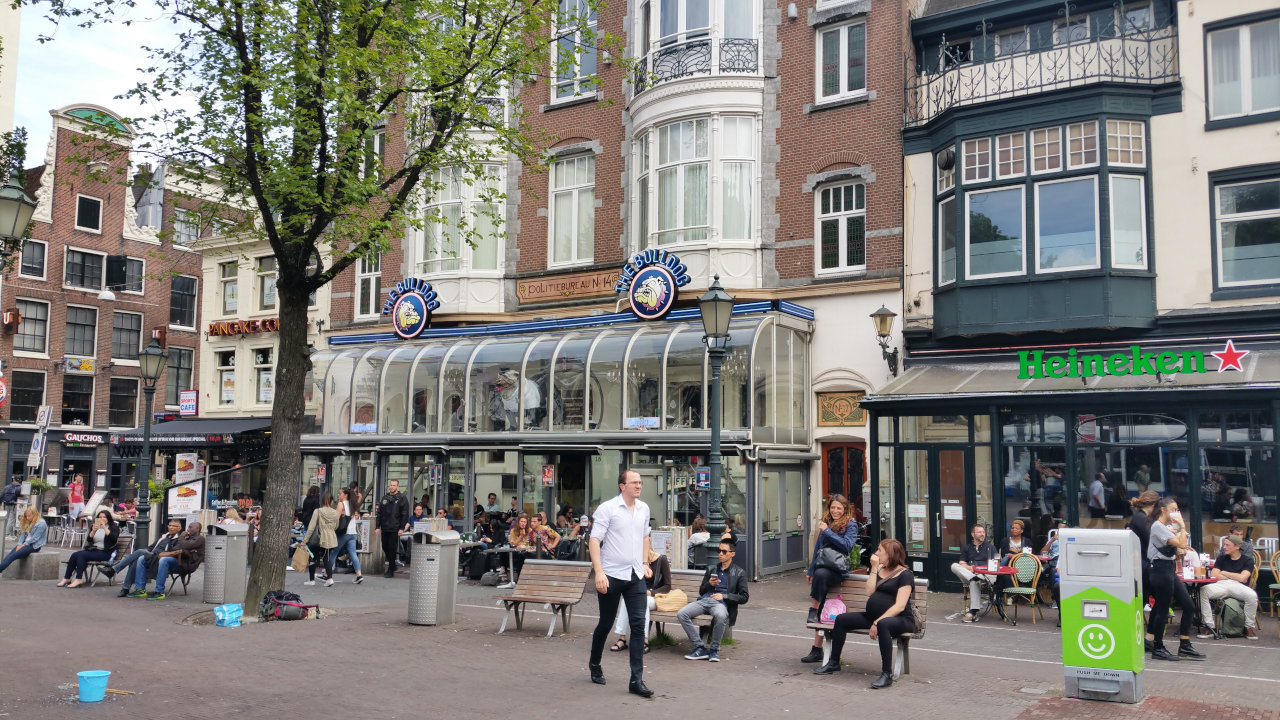 Eventually we end up at the Leidseplein. Around this square you can find lots of bars and clubs. In the picture you actually see a large coffeeshop, called The Bulldog. In this shop people can buy the green stuff that Amsterdam is known for. Oddly enough the sign above the shop says police station. The tourists don’t seem to mind and enter the building anyway. My guess is that they can’t read Dutch signs. 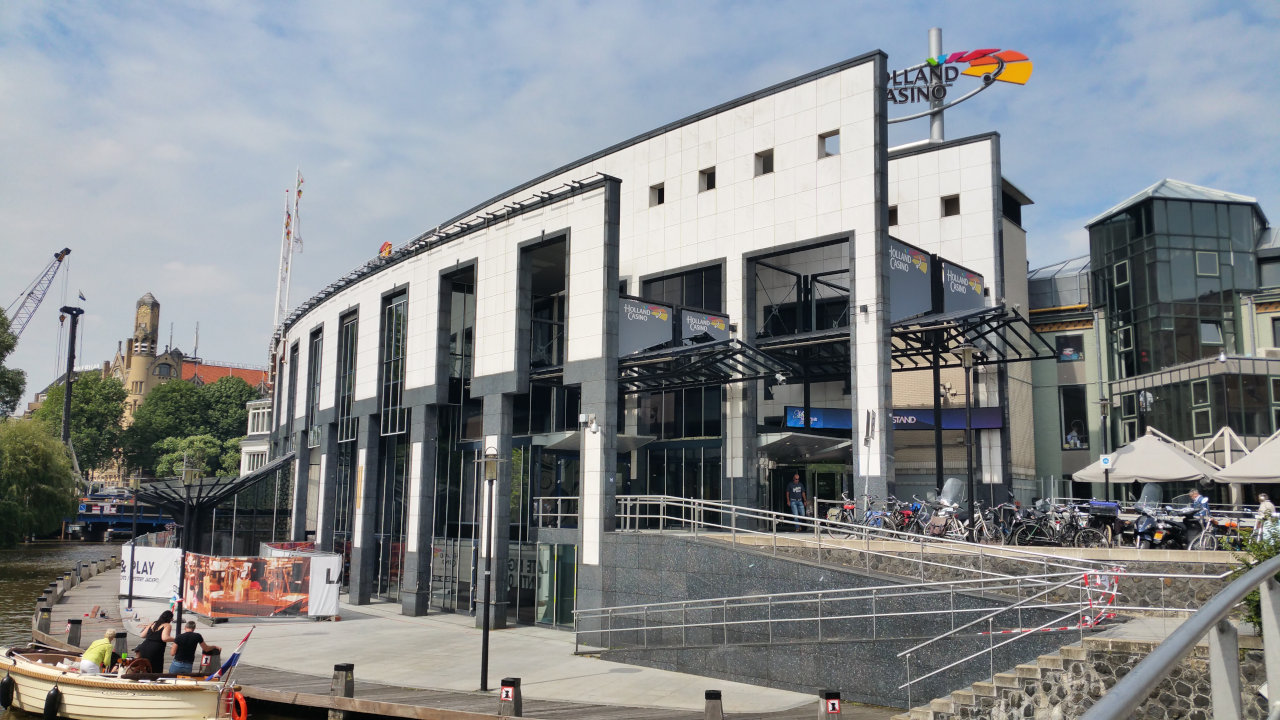 Nature, shops and museums next to each other 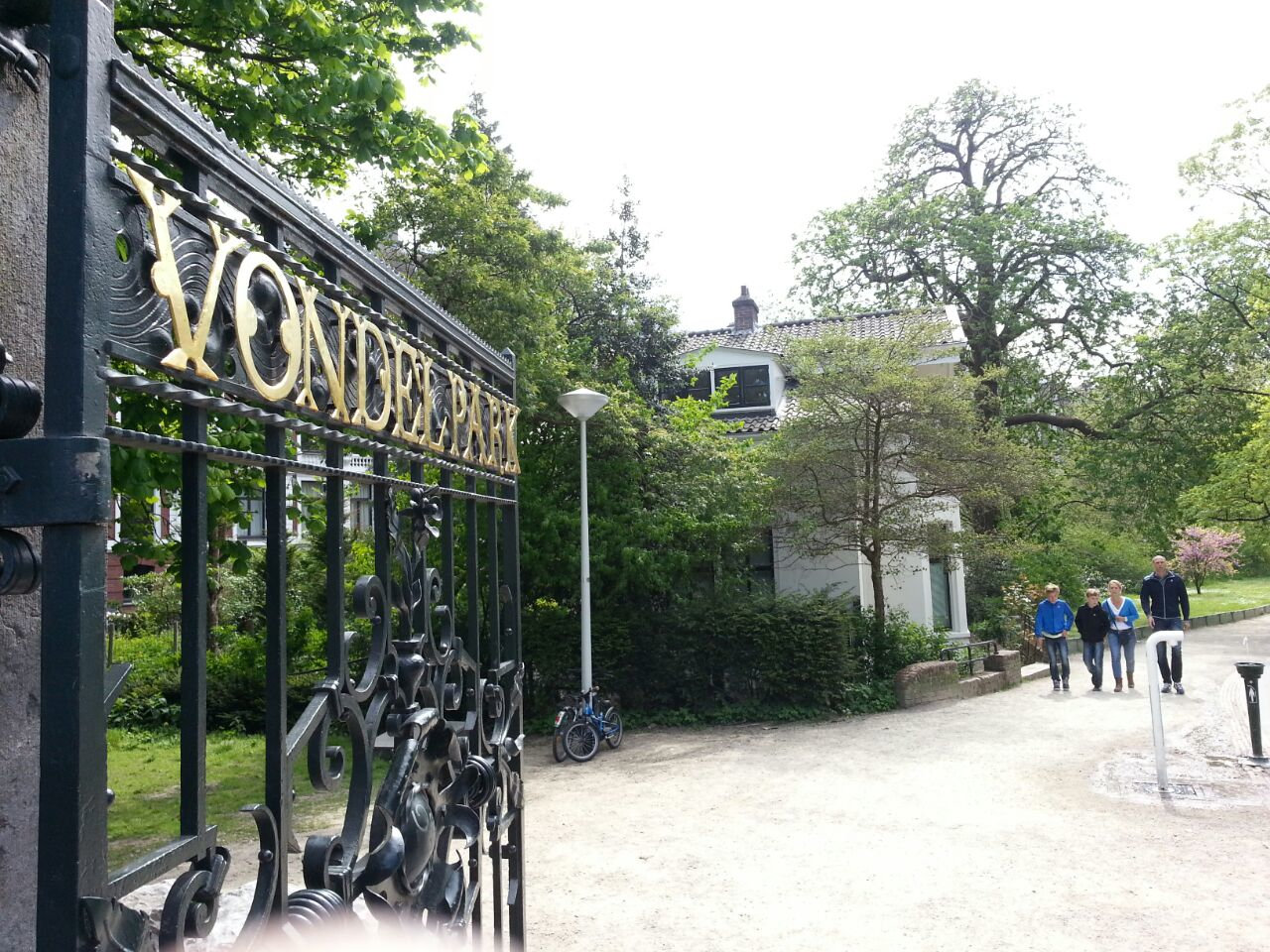 Just below the nightlife area of Amsterdam is the Vondelpark hiding behind this green and golden gate. It’s the central park of Amsterdam. An oasis of peace and serenity, where locals and tourists come to escape the busy city life. 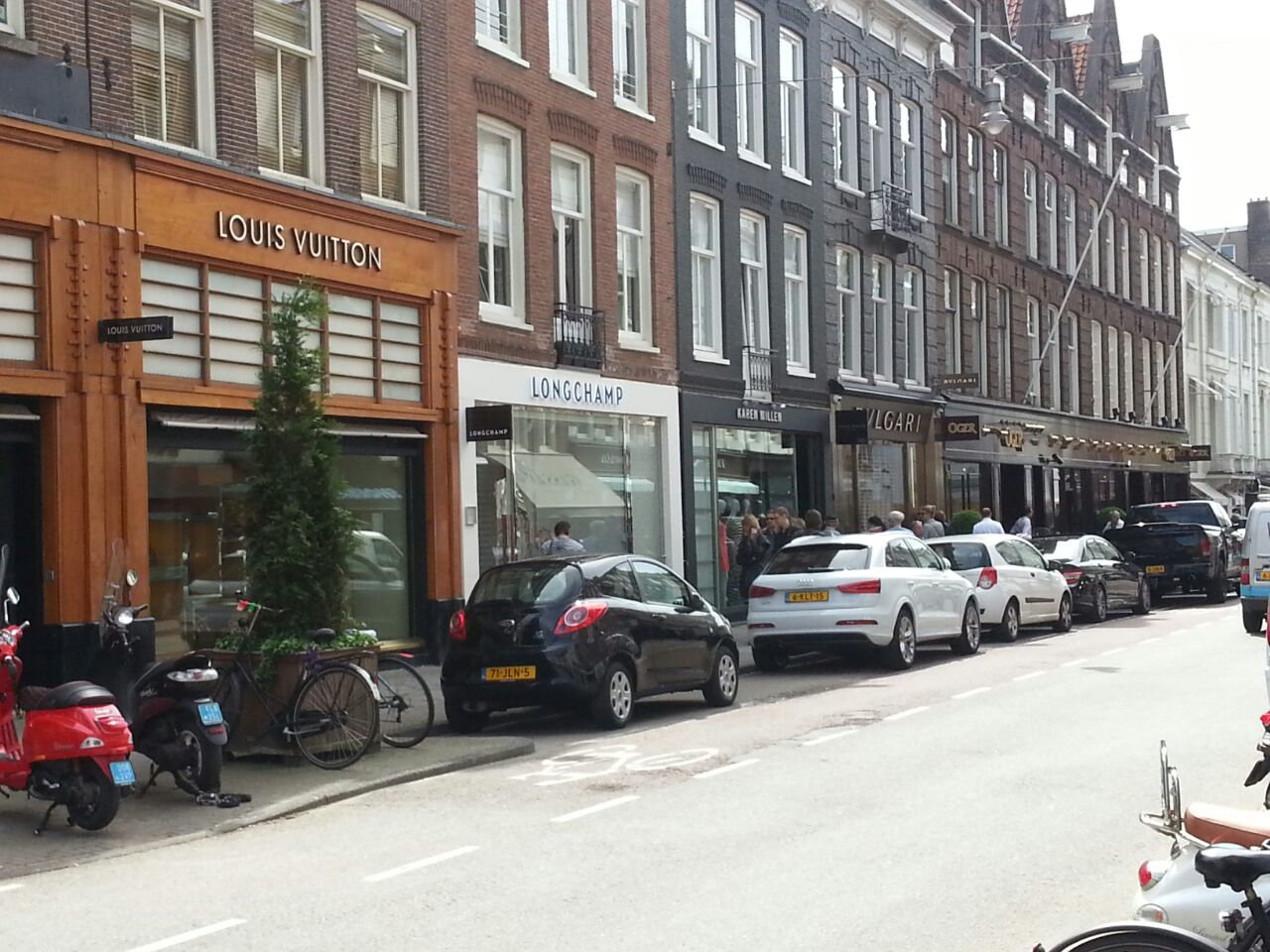 East of the Vondelpark lies the most expensive shopping street of Amsterdam. It’s the wet dream of all fashion shoppers. Sometimes they do have nice bargains, but in general you need a properly filled wallet to shop here. 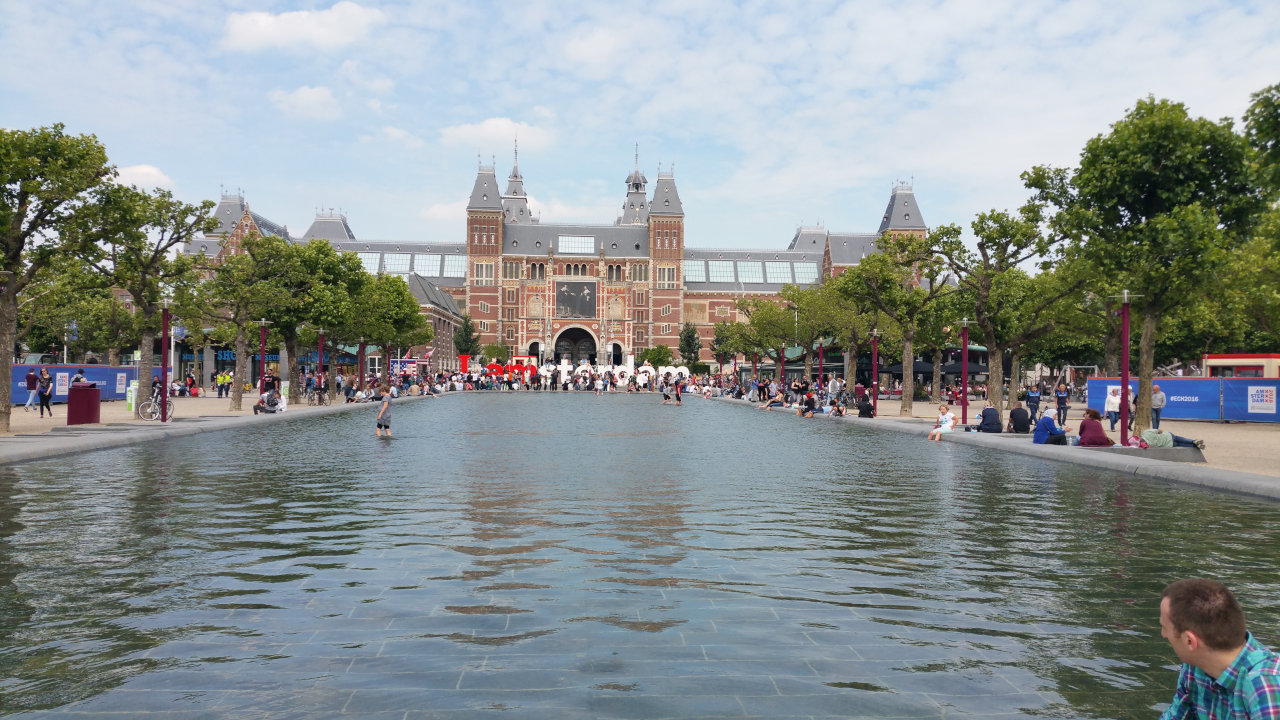 And finally we arrive at our destination. We survived the journey from Amsterdam central station to the cultural heart of Amsterdam, which is Museum square. Here you will find the Rijksmuseum, Van Gogh Museum, the famous concert building and many more cultural landmarks. During the Dutch golden age Amsterdam produced many master painters, such as Rembrandt, Van Gogh, Mondriaan, Escher, Karel Appel and so on. If you want to discover the beautiful paintings of these masters, then head into the building right in front of me. It is usually a good idea to get tickets for the museums in advance so that you can skip the long waiting lines. And the miraculous world of Dutch art will open up to you.

I hope you enjoyed the journey. The IAmsterdam-letters that you see on the last picture are currently touring through the city to draw attention to the less known parts of Amsterdam. Next time you are on vacation in Amsterdam you will know exactly where to go. Just remember to take it easy, because that’s what vacations are all about.

Author: Monica Bennett
Filed Under: Europe
The most magical things to do at theme park The Efteling, The Netherlands
5 Reasons Why Lucerne is the Most Gorgeous City in Switzerland