The 7 most exotic churches that define Europe 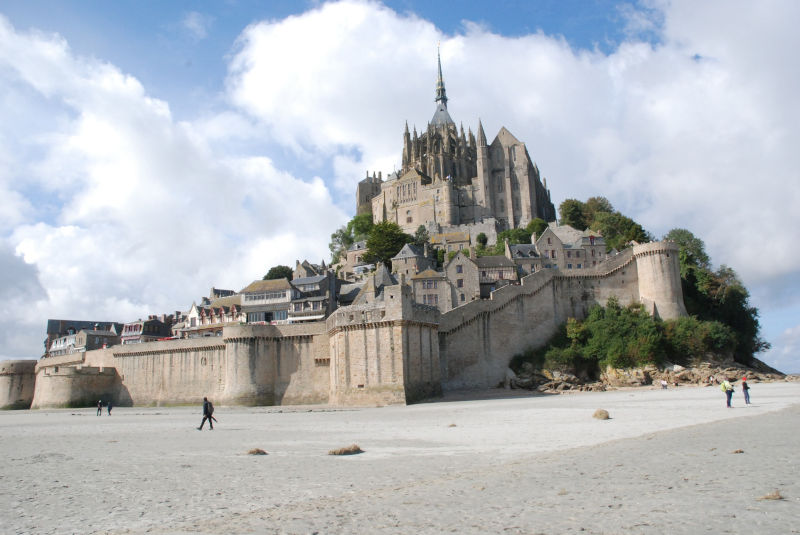 Grandiose old world churches have become the hallmark of Europe. Throughout history churches have accumulated incredible amounts of wealth which they used to create gigantic churches and extravagant cathedrals in an attempt to bring people closer to God. And we as travelers get to enjoy these timeless works even today.

The biggest churches weren’t built in a day and usually have an entire history behind them. Diving into the history, culture, art and symbolism surrounding the churches is part of the fun when exploring them. To show you around some of these beauties I made a list of the most exotic churches in Europe which you can expect during your trips. 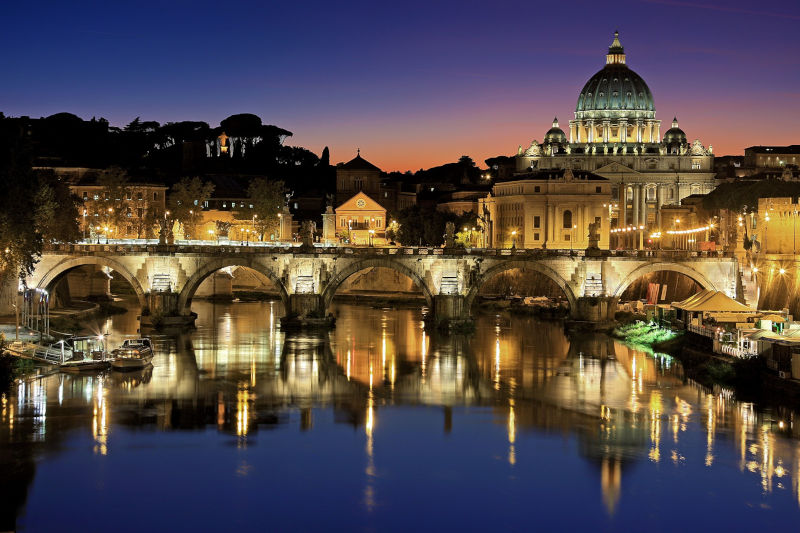 The most famous church in the world is of course the St. Peter’s Basilica. It is the single largest church in the world, which makes sense as this is the burial site of Saint Peter, one of the disciples of Jesus and the first Pope. Chances are that you have also seen the St. Peter’s Basilica on television as the current Pope usually addresses the world from here during important celebrations.

Leading up to the church is a long boulevard which turns into St. Peter’s Square, which has the St. Peter’s Basilica towering over it. And the closer you get to the building the more you start to realize how ridiculously big the structure actually is. And you start to wonder how on earth they were capable of creating such giant pillars centuries back.

And it’s not just imposing on the outside, as once you enter it you realize this Renaissance styled bastion of the catholic faith is filled to the brim with entire halls of religious and artistic treasures. The building feels like a huge open museum, with paintings and sculptures across all the walls and even the dome being designed by Michelangelo. It’s definitely worth taking a tour through the Vatican to get the full experience of this exotic structure. Visiting this place is both a humbling and inspiring experience. 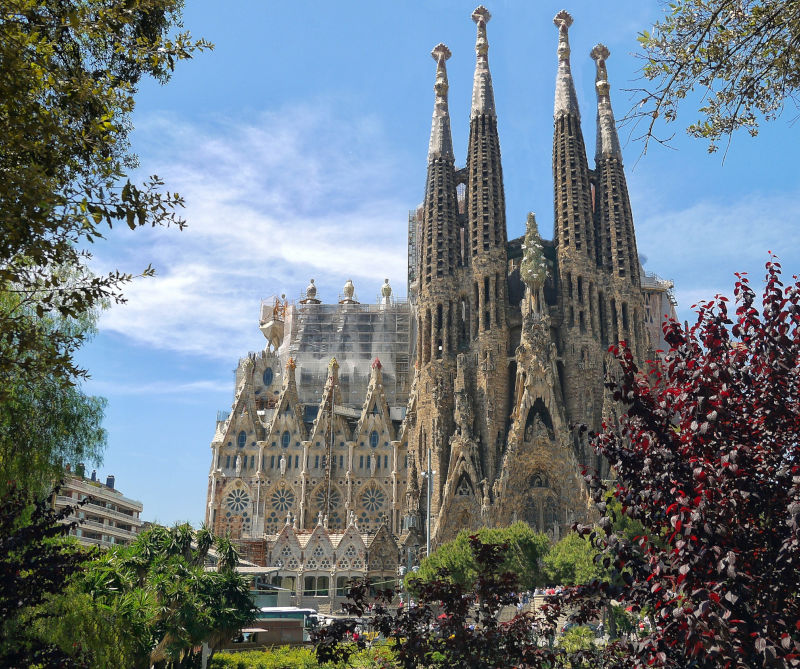 When you are in Barcelona it’s easy to get caught up in the shopping district and spend your entire vacation there. But know that a trip to Barcelona is not complete without a visit to the Sagrada Familia. Throughout the years the Sagrada Familia has grown to be the face of Barcelona. If you climb one of the spirals then you will get a grand view over the city, allowing you to take some great panoramic pictures.

The Sagrada Familia has been the life’s work of Gaudi, who was the main architect of the design and worked on the church until his death. As with many works of Gaudi it looks like a surreal fairytale building, where natural shapes have taken over the gothic structure. Despite that people have been working on the basilica since 1883 large parts have yet to be built. Once the largest tower is finished the Sagrada Familia will be the tallest church in the world. 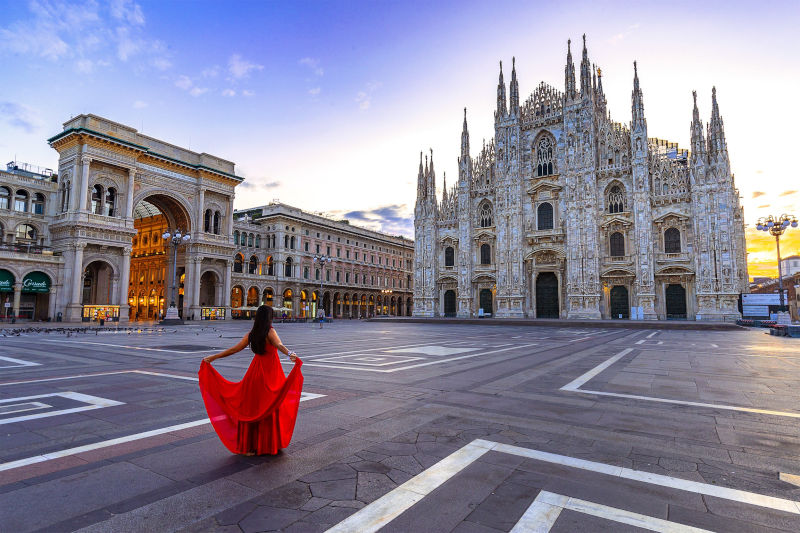 The Milan Cathedral is arguably one of the overdesigned churches in the world, with impressive results. Also known as the Duomo di Milano, it is the largest church in Italy. This imposing structure lies in the very heart of Milan, so you can’t really miss it. Many significant historical events have taken place around this cathedral. It was here that Napoleon was crowned King of Italy. And it is here that you will find one of the nails that Jesus was crucified with. So as you can imagine it’s an important church indeed.

The church has had countless of architects working on it resulting in a curious mixture of styles. Its elaborate design probably aided in the cathedral becoming a popular tourist attraction in Milan as you won’t find anything quite like it anywhere else. The roof of the church is dotted with countless spires with religious figures standing on top of them. For a small fee you can also visit the museum of the cathedral, where you will find countless medieval treasures. It’s also possible to go unto the rooftop of the cathedral for a unique perspective of Milan. 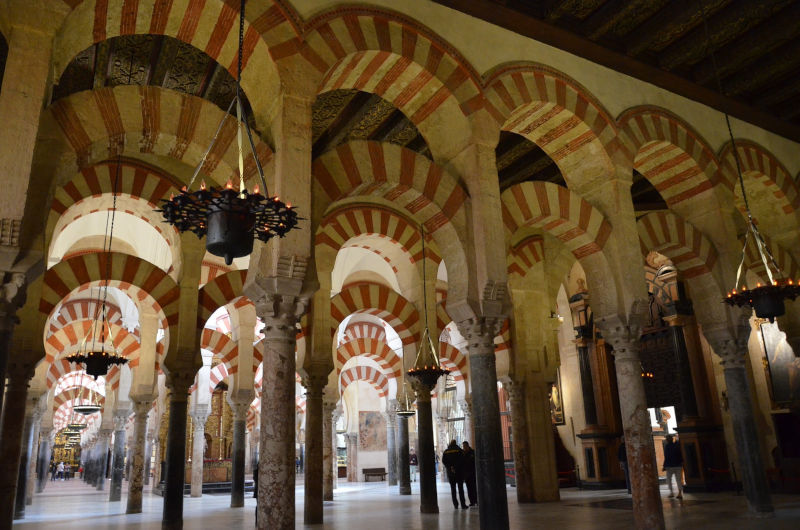 At the crossroad of civilizations you can find some of the most amazing churches. A perfect example of this is the Mosque–Cathedral of Córdoba, which is a perfect blend of different cultures. Before the Spanish Reconquista this cathedral used to be a mosque and that still shows today.

With over a thousand years of history the cathedral is one of the most unique looking churches in Europe. As the centuries passed the church kept expanding. And with each expansion you can see the details and architecture of the church becoming more elaborate. As you stroll through the church you will find hundreds of columns and arches towering over you in flamboyant red and white. Especially in the stunningly decorated ceilings you can see the transition of ancient Islamic and Christian baroque and renaissance architecture throughout the cathedral, making this church a true homage to the history of Spain. 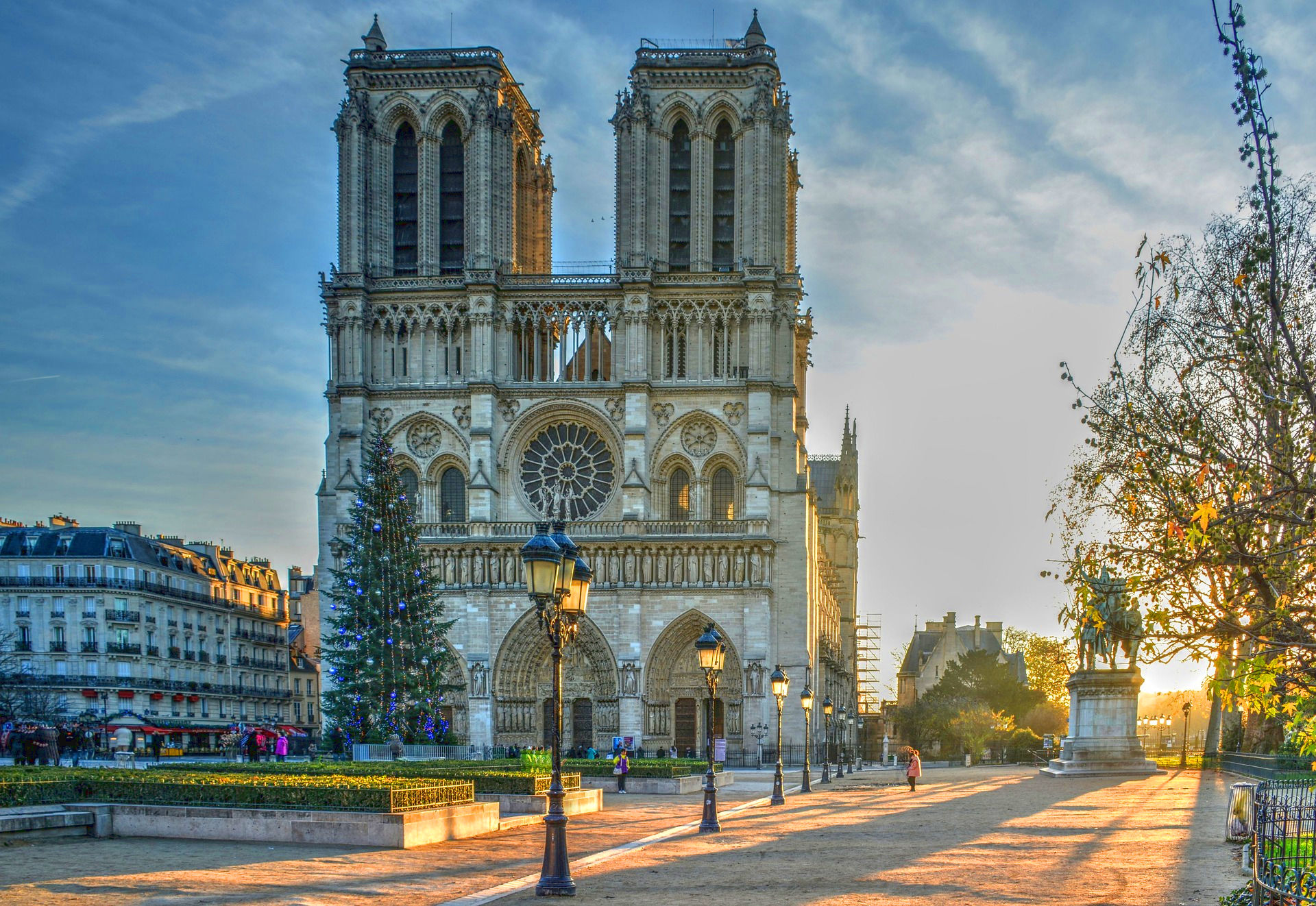 The Notre-Dame is one of the icons of Paris, with millions of people visiting the church each year. Many stories have been told about it as until the Eiffel tower was built the Notre-Dame was actually the tallest building in Paris. Now we are all familiar with the hunchback of the Notre-Dame, the distinctive silhouette of the cathedral and the horrifying water spewing gargoyles watching over it, but beyond that most people know surprisingly little about this mystical church.

Lesser known is that Notre-Dame houses some pretty significant historical treasures. Most notably it is home to three relics of Christ, such as the thorn crown of Christ, a piece of the cross on which Jesus was crucified and one of the nails. Each showing a little bit of light on the biblical story. One of the most notable features of this Gothic cathedral are its stunning stained glass windows. These ancient rose windows are almost 800 years old and tell a very visual story about the life of Christ. As people in the middle ages were often illiterate it was important for the church to show people the story of Christ through visual arts and sculptures and the terrible evils that people needed to be protected from. These stories can be found in the many beautiful highlights of the Notre-Dame. And as you wander around the church you get to watch these fantastic old stories within this medieval monument. 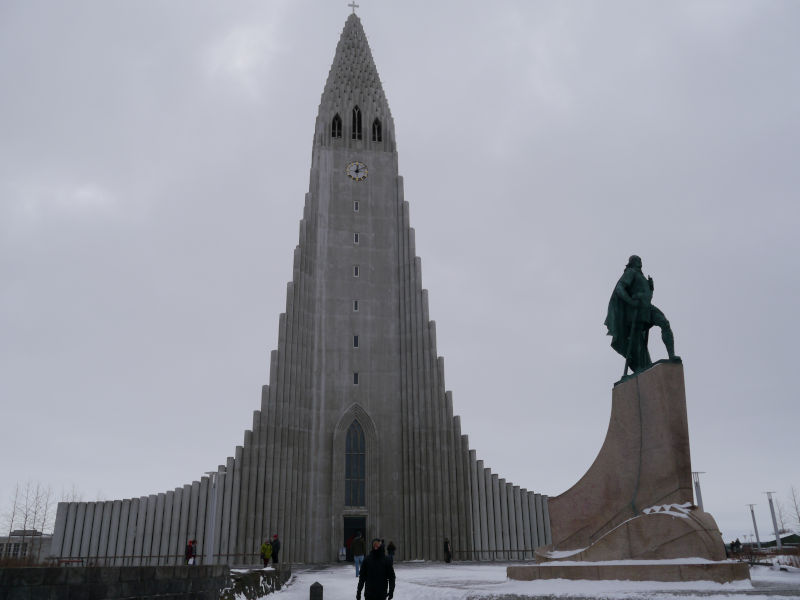 While the Catholic churches in South Europe have the most elaborate and impossible designs, this Lutheran church in Iceland has a calm and modest architecture which pays homage to Iceland’s mountainous landscapes. It reminds us of the magical glaciers Iceland has to offer. The church of Hallgrímur stands in the capital of Iceland and you can behold this imposing landmark from across the city as it prominently towers above everything in the skyline.

In front of the church you will find a statue of the first person to have discovered North America. Which is in sharp contrast from what we see in the other churches, as it’s not really a statue of a religious figure, but still a symbol of local pride. It’s not a church that represents Rome, but it stands for a truly local and unique culture. 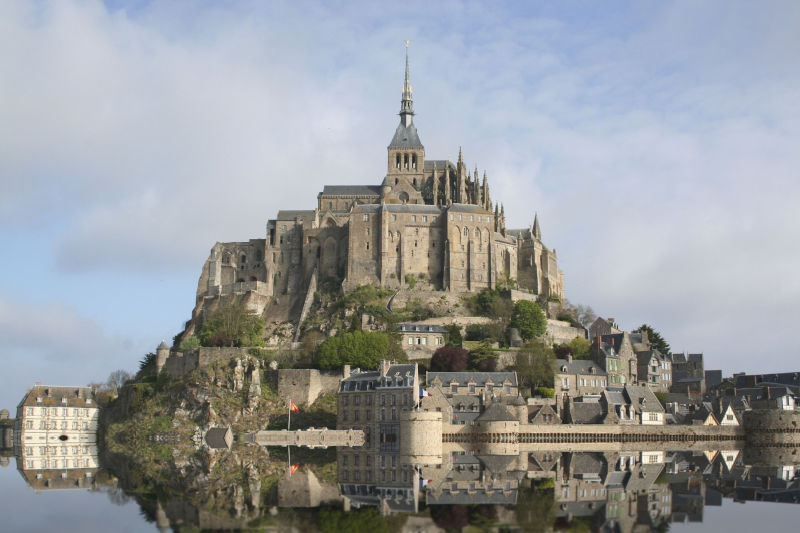 The final church on this list and perhaps the most exotic one in Europe is an abbey that looks like it comes straight from a fairytale. Mont Saint-Michel Abbey is a monastery in Normandy that has been nicknamed “the miracle”. The monastery lies in a pretty unique position as it stands on top of a hill on an island off the coast of France.

On low tide people can walk towards the monastery, but as the tide rises the monastery gets surrounded by the ocean. These natural defenses have prevented the monastery from getting besieged in the past, but it has also aided in the monastery becoming a perfect destination for pilgrimages and cultural trips. Mont Saint-Michel is certainly one of the most fascinating sights in Europe.

Author: Chris Bell
Filed Under: Europe
5 Reasons Why Lucerne is the Most Gorgeous City in Switzerland
The beautiful star shaped fort cities of the Netherlands [with drone footage]

1 thought on “The 7 most exotic churches that define Europe”