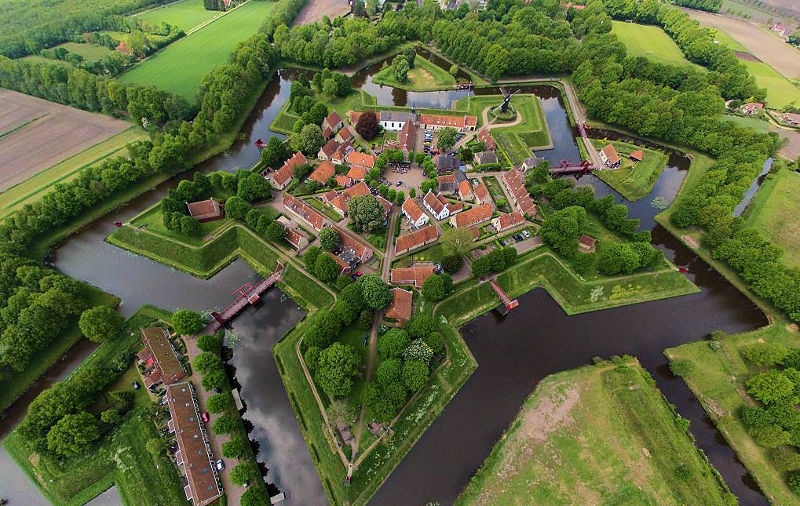 The Netherlands is known for its beautiful canals in the heart of cities like Amsterdam and Utrecht. But outside of the major cities you will find a lot of well preserved star shaped fortress towns. Contrary to the fortifications of regular middle ages cities who were protected by city walls, these fortified cities were originally built as national strategic defenses across the country using moat, canals, bastions, ravelins and so on to protect important borders, roads and waterways. In this blog we check out breathtaking aerial drone footage of some of the most amazing star shaped fortifications in the Netherlands.

Heusden is a city strategically located between the provinces Holland and Brabant. This 12th century city was also one of the first places to gain city walls in the Netherlands. Heusden has faced many destructive disasters throughout history, which you can still see in the castle ruins within the city today, but the city in general was always rebuild. Today the city stands as as beautiful as ever, and in the center you will find some nice little cafe terraces to sit down at on a sunny day.

Defending the access to Amsterdam you will find one of the most well preserved fortress cities in Europe. And with its wide canals and church Naarden is a local favorite among star shaped fort cities. You can walk over the defense works, visit the Netherlands Fortress Museum inside one the bastions and during the weekends you can even take a boat tour through the canals. Naarden is part of a larger defense network called the Waterlines, which is a network of fortresses and wartime canals that can be flooded in case of an invasion.

As one of the more impressive looking and tourist friendly fortress towns we have also recommended Naarden as one of the best places to visit nearby Amsterdam.

Within the Kingdom of the Netherlands the colorful and culturally rich capital of the Island Curaçao is called Willemstad. But within the mainland of the Netherlands you will also find a neat little fort city called Willemstad. This city named after William of Orange both protected Holland from troops advancing north and it kept hostile boats from sailing down the most important Dutch rivers. Even in the second world war it functioned as a defensive position. As a strategically placed military fort and historical monument Willemstad is a great representation of the ingenuity and importance of Dutch architecture.

Fort Bourtange is arguably the most famous star shaped fort town in the Netherlands. William of Orange had ordered to build this fortification to cut off an enemy supply route from Germany. As civilians settled in the fort it eventually became a stronghold. In the Netherlands only places with city rights were allowed to build city walls, but Fort Bourtange was one of the rare exceptions.

Due to its extensive fortifications and canals, ancient Tilia trees and multiple small museums, including an old military barracks, Fort Bourtange is arguably the most well known and popular Fort town in the Netherlands and is often considered a highlight for Asian tourists.

Brielle can be considered the true birthplace of the Netherlands. It was the capture of city Brielle by the Watergeuzen (meaning Sea Beggars, as they were Dutch pirates allied with William of Orange) which sparked the Dutch rebellion and encouraged surrounding cities to declare independence of Spain. Which was a historical event which laid the foundation for the Netherlands as we know it.

The city of Brielle has some interesting sights as well. The 57 meter high church of Brielle for example was originally meant to become the largest church in Holland, but it was never entirely finished. It was also here that William of Orange married to his wife.

Author: Chris Bell
Filed Under: Europe
The 7 most exotic churches that define Europe
A (free) walking tour through the center of Amsterdam