A guide to Rotterdam for the Eurovision Song festival 2021 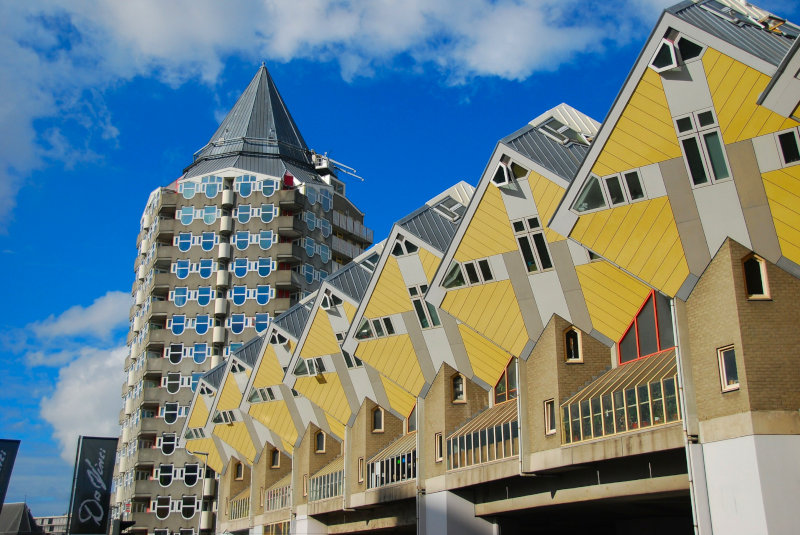 Eurovision 2021 is going to be held in Rotterdam. Rotterdam is known as being the most modern city of the Netherlands, with many incredible things to do. So to prepare our readers for the upcoming Eurovision we wrote this guide where we go over all the interesting things you can enjoy in Rotterdam.

Duncan Laurence won the Eurovision of 2019. Before the Eurovision started the Dutchman, who was actually born near Rotterdam, was already a favorite with the bookies. As he put down an amazing solo show it was inevitable that he was going to be the one to finally bring the Eurovision back to the Netherlands. An achievement nobody had managed to pull off since 1975.

Nothing beats seeing Eurovision live. But it’s still quite enjoyable to watch the old livestreams on YouTube from the previous song contests. If you want to find how how Duncan Laurence fared against his competitors in the Grand Finals of the Eurovision Song Contest of 2019, then you can still find the footage of the entire show here.

In 2020 the Eurovision participants seemed to send in stronger entries than ever before. With many catchy, and often humorous, songs contending for the top spots. But unfortunately due to the unprecedented lockdowns across the world the Eurovision Song Contest couldn’t proceed in 2020. Instead a small and humble show was aired, with a few guest performances, and short clips of all submitted songs. You can find the livestream here.

All countries will be sending in brand new songs to Eurovision in 2021, but as the most popular artists will reprise their role we can expect 2021 to be a very competitive year for the contest.

The Eurovision Presenters in Rotterdam 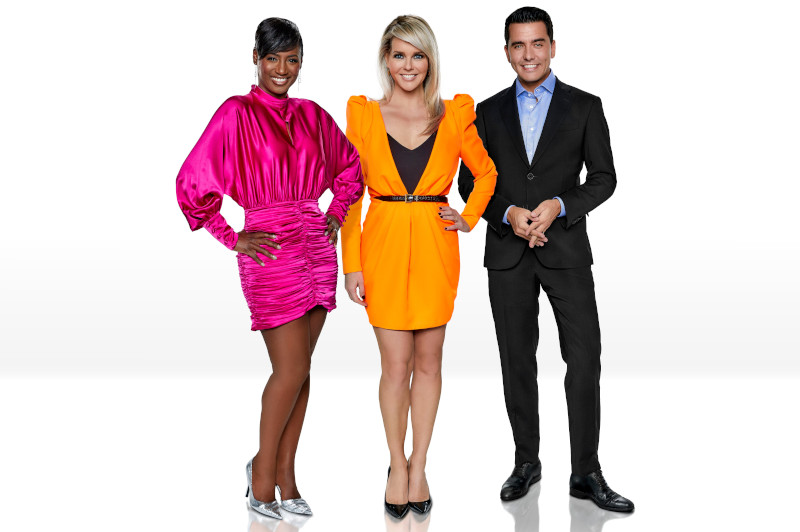 The Eurovision in 2021 will be presented by three familiar faces. The first one is Edsilia Rombley, who has participated in the Eurovision in 1998 and 2007. With her amazing performances she has certainly charmed the European audiences before, as she became fourth place in 1998 with the song Hemel en Aarde. You can listen to her amazing Eurovision performance below.

Jan Smit is a lifelong singer from a famous musical town called Volendam, who usually sings traditional Dutch and German music. He has been one of the commentators of the Eurovision on Dutch television for several years now. As a musical expert he has also been part of the Dutch Eurovision jury.

Chantal Janzen is a charismatic Dutch television host that often performs as a presenter or jury member in talent shows, such as Holland’s got Talent, Idols and Dancing with the Stars. Chantal also has a long history with Dutch movie and television performances and starred in several Dutch musicals such as Wicked, Beauty and the Beast and Saturday Night Fever. With this much combined talent and experience the three hosts are sure to turn the Eurovision 2021 in Rotterdam into a fun evening filled with great, diverse and hilarious musical acts.

The capital of modern architecture 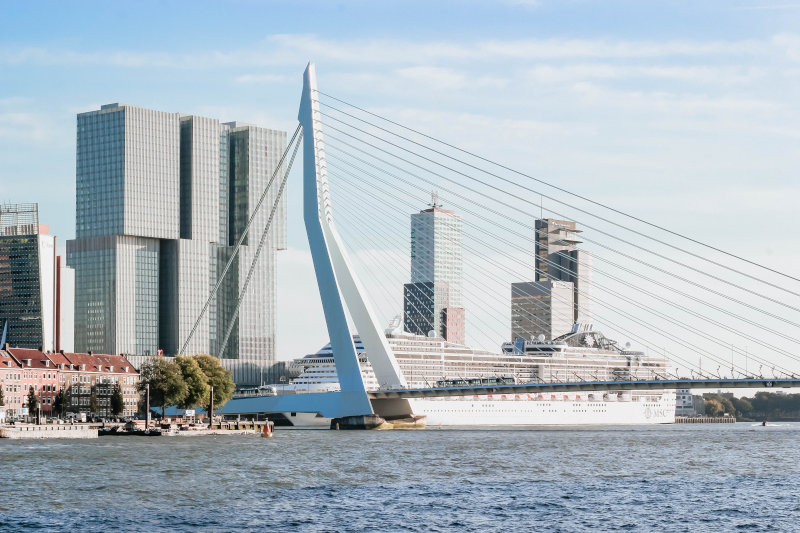 After Duncan’s win, Netta, the Eurovision winner of 2018, shouted on stage that we were heading to Amsterdam. But eventually the organisation decided to hold the event in the Ahoy in Rotterdam instead. As there is a direct train connection between Amsterdam and Rotterdam you can still check out Amsterdam, even if you stay in Rotterdam. So don’t be afraid to book a couple extra days, as you can explore the rest of the Netherlands quite well from Rotterdam.

Rotterdam used to be one of the most beautiful cities in the Netherlands, but unfortunately the city center was destroyed during the second world war. Since then Rotterdam has been experimenting with cutting-edge architecture. Ensuring that Rotterdam is filled with unique sights that you won’t find anywhere else in the world.

This had led to the creation of many iconic landmarks in Rotterdam. The most notable one is probably the Erasmus bridge, which has become the face of Rotterdam. As a tourist chances are you will buy some postcards to send home to your family and friends. And those postcards will probably have the Erasmus bridge on them. The bridge was named after the famous Dutch philosopher Erasmus and lies over the New Meuse.

The shopping heart of the Netherlands

Rotterdam is home to some of the most famous shopping districts in the Netherlands. In the heart of Rotterdam you will for example find the Beurstraverse, which the locals have given the somewhat hilarious name the Koopgoot (translation: the buy gutter). Which is a beautifully designed shopping area, where you can find fashion shops on street level, but you can take the stairs down to visit lots of fashion stores below street level. 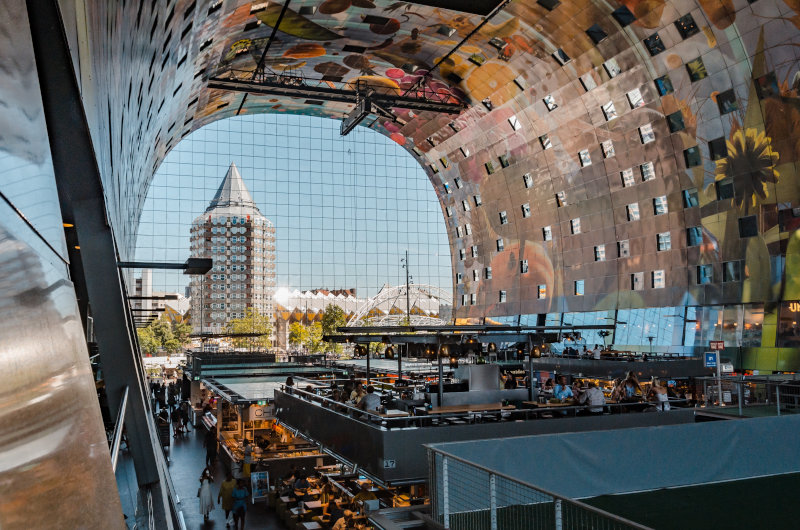 Another interesting location is the Market Hall. The ceiling and walls of the Market Hall are covered in what perhaps is the largest work of art on the planet. And in this hall you will find dozens of food stands, where you can fill your belly with local treats after a long day of shopping.

The largest port of Europe 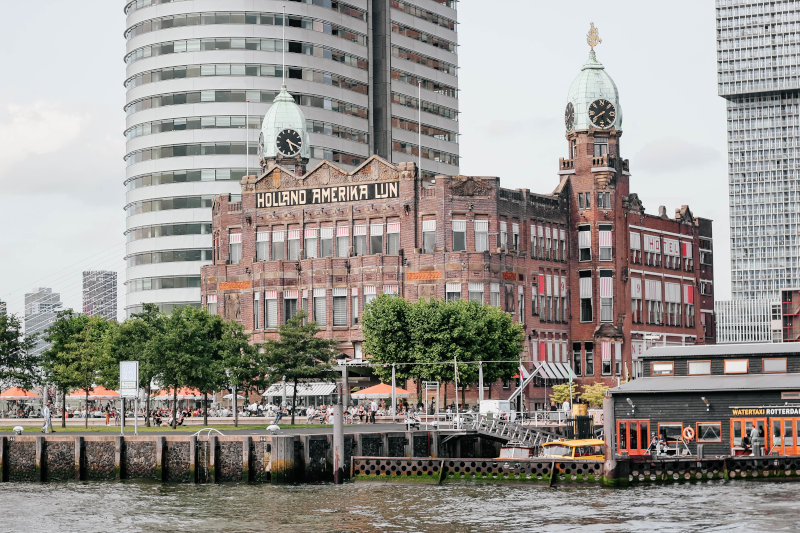 Rotterdam largely owes its historical importance and economic prosperity to its harbor. Today it is actually the largest port in Europe. So when you are in Rotterdam it can be fun to take a guided boat tour through the harbor. Maybe you even get to spot the historical headquarters of the Holland America line. Which has brought countless Dutch migrants to the land of the free.

Click here to get some tickets for a tour through the Rotterdam harbor.

A panoramic view from the Euromast 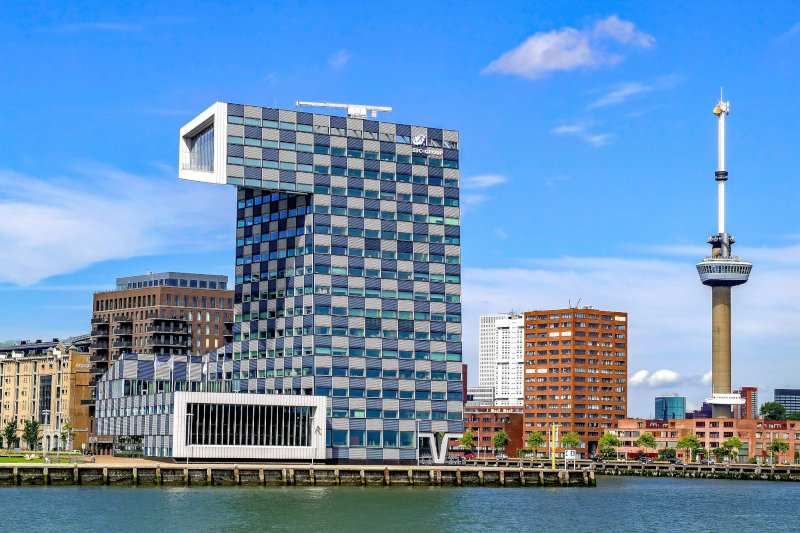 The Euromast is the highest tower in the Netherlands that is open to the public. The Netherlands is a very flat country. You will be hard pressed to find any mountains in here. But it’s pretty convenient if you want to oversee large stretches of land from a high vantage point. So if you want to have a nice panoramic view over Rotterdam, then you should visit the Euromast.

Windmills at the Kinderdijk 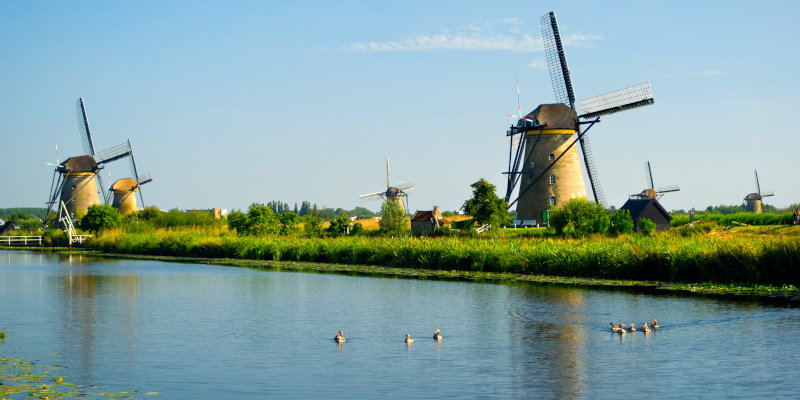 You haven’t been truly in the Netherlands if you haven’t seen the windmills, canals and the green fields that the country is known for. And there just happens to be an UNESCO World Heritage Site that offers exactly that, right next to Rotterdam!

The Kinderdijk is a picturesque place where you can enjoy the iconic landscape that Netherlands is known for. If you want to take some photos that prove you have truly been to Holland and experienced the local culture and beauty, then you will want to check out the Kinderdijk.

Keukenhof, the flower fields of Europe 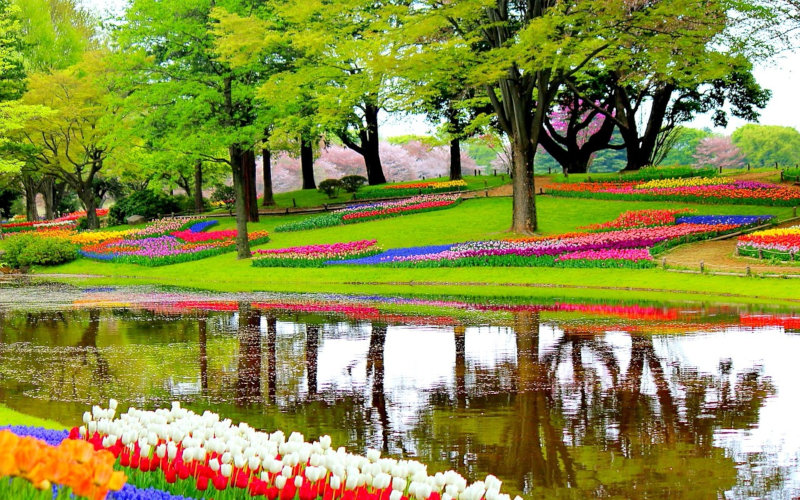 What more is the Netherlands known for? Tulips and fields of colorful flowers of course! The Keukenhof is a place that’s also known as the garden of Europe. It is here that you will find one of the largest flower gardens on the planet. At the Keukenhof you will find beautiful flower exhibitions in all kinds of patterns. If you want to take photos of yourself in some amazing flower fields then you certainly must visit the Keukenhof.

But be aware that the Eurovision takes place from 18 may 2021 until 22 may 2021, while the Keukenhof is open from 20 march 2021 until 9 may 2021, because that’s when the flowers are in full bloom. So if you want to visit this unique attraction, then you should do it a few days before the Eurovision starts.

Fairytales at theme park the Efteling 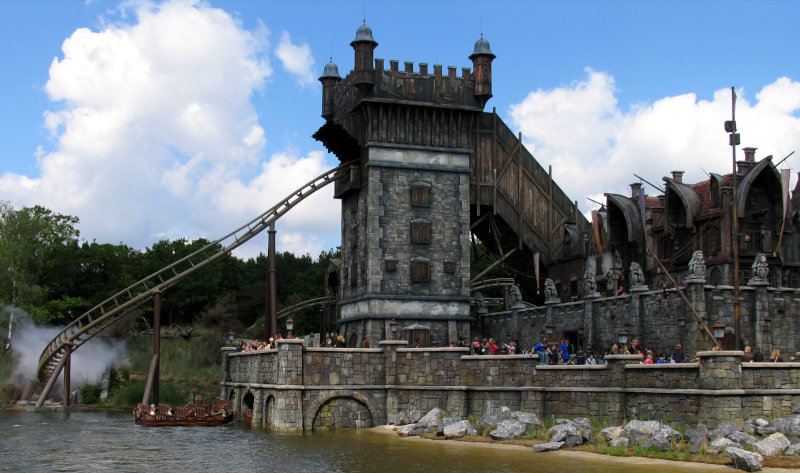 If you came to the Netherlands with your family, then it could be fun to visit one of the biggest theme parks in Europe. Nearby Rotterdam you will the Efteling, which is a fantasy themed theme park. So you will find many attractions here that are inspired by old legends, folklore and books such as the works of the Brothers Grimm.

At the Efteling you will find anything from rollercoasters, to rapid rivers and fairytale forests. If you’re curious about everything there is to do in the Efteling, then be sure to check out my extensive blog about the attractions of the Efteling. The theme park offers something for everyone, so you can be sure it will be fun for all ages. If you’re going to the Efteling it is a good idea to get your tickets to the Efteling in advance to skip the line.

Where to stay in Rotterdam 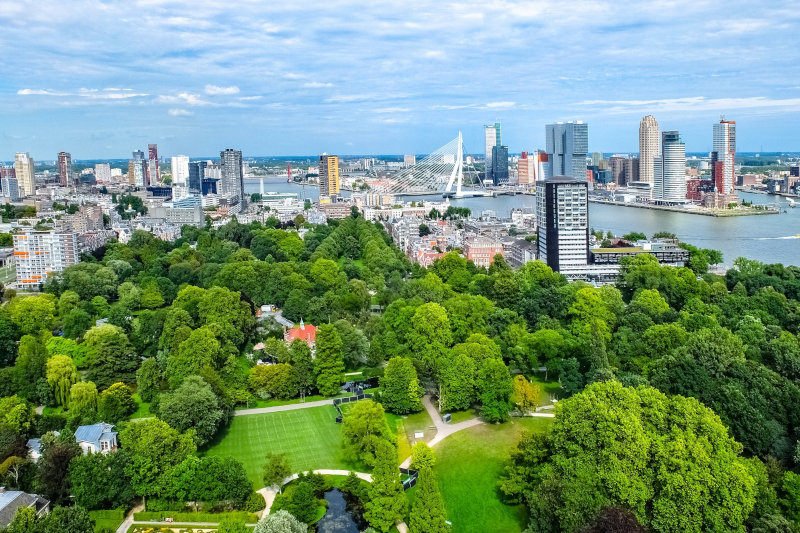 When you are in staying in Rotterdam for your Eurovision trip then you want every waking moment to be a fun experience. That’s why it’s important to pick a hotel that you can enjoy as well. When picking a hotel in Rotterdam there are a lot of things to consider. It needs to be centrally located, while preferably also nearby public transportation. It needs to be somewhat luxurious, but it also needs to stay affordable. To give you some inspiration on what Rotterdam has to offer I made a selection some of the most interesting hotels in Rotterdam that seem to have it all.

Docked in Rotterdam you will find a gigantic 228 meters (roughly 0,142 mile) cruise ship. This historical flagship of the Holland America line used to carry people across the Atlantic from Rotterdam to New York. Today however, it serves as an amazing hotel in the heart of Rotterdam. In the SS Rotterdam hotel you get to combine the luxury and comfort of a cruise ship, with amazing views over Rotterdam and the excitement of Eurovision. Next to the hotel you will also find a water taxi and bus that can bring you wherever you need to be. You will be hard pressed to find anything quite like this atmospheric hotel anywhere else. 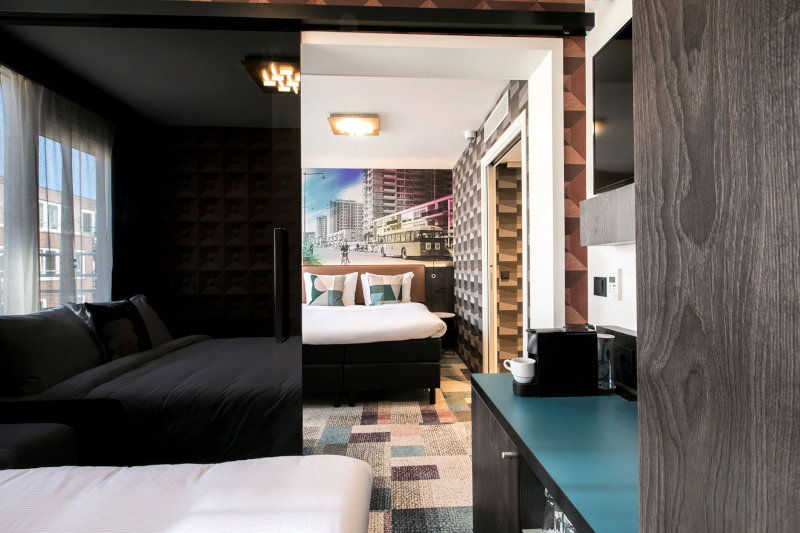 If you prefer to stay with your feet on the ground then Savoy Hotel Rotterdam is a good pick. It has beautifully designed rooms, comfortable beds, new designer bathrooms. But its ultimate selling point is its location. As it lies within walking distance from the shopping center of Rotterdam, the market hall, the old harbor and multiple subway stations from where you can easily travel around. From the Savoy hotel Rotterdam the entire city lies at your fingertips. And from your hotel you can easily reach the Eurovision venue by taking the bus or subway to metro station Zuidplein.

Overlooking the New Meuse you will find one of the more luxurious hotels of Rotterdam. If you desire a 5 star hotel, then the Mainport Design Hotel might just be the best one in Rotterdam. It’s even possible to get a room with your own private sauna. It lies nearby the iconic Erasmus bridge. If you walk to the north then you will find the city center with countless of stores, almost right around the corner. There are important museums nearby such as the maritime museum. And the tram and metro stations in the street can connect you to the entire city. At your hotel you can enjoy a stunning view while relaxing in your bathtub, during the day you can shop until you drop and in the evening you can head out to Ahoy to enjoy the Eurovision 2021.

I hope this blog has given you some inspiration on things you could do in Rotterdam, while you’re staying here for the Eurovision. Rotterdam is an excellent base of operations to explore the Netherlands from. And within the city you will also find some very memorable hotels that will certainly add some flavour to your stay. This way you could turn your Eurovision trip into a vacation you will never forget.

Author: Monica Bennett
Filed Under: Europe
The 5 best things to do in the scenic Dubrovnik, Croatia
5 Reasons Why Lucerne is the Most Gorgeous City in Switzerland