The 5 best things to do in the scenic Dubrovnik, Croatia

Croatia has since long been home to some of Europe’s most appealing travel destinations. Since its War of Independence way back in the 1990s, Croatia has captured the hearts of tourists from all over the world with its exciting mix of medieval cities, historic ruins, and its exceptional wealth of stunning natural wonders, such as the Plitvice Lakes.

Out of all the fantastic places Croatia has to offer to its visitors, Dubrovnik is probably one of the nicest and certainly at the top of most travelers lists. For a good reason! Nicknamed the “Pearl of the Adriatic”, Dubrovnik offers many sightseeing treasures to its visitors. From being able to spend the day exploring the walls and cobblestone streets of the mighty city and visiting the shooting locations from Game of Thrones, all the way to spending days at the beach or exploring nearby islands. It’s all possible in Dubrovnik, making it a very comprehensive travel destinations where there is always something to see and do. To give you an idea on how to get the most out of your Dubrovnik experience, we created a list of the best things to do in Dubrovnik.

Cross the bridge into the historic old town via Pile Gate 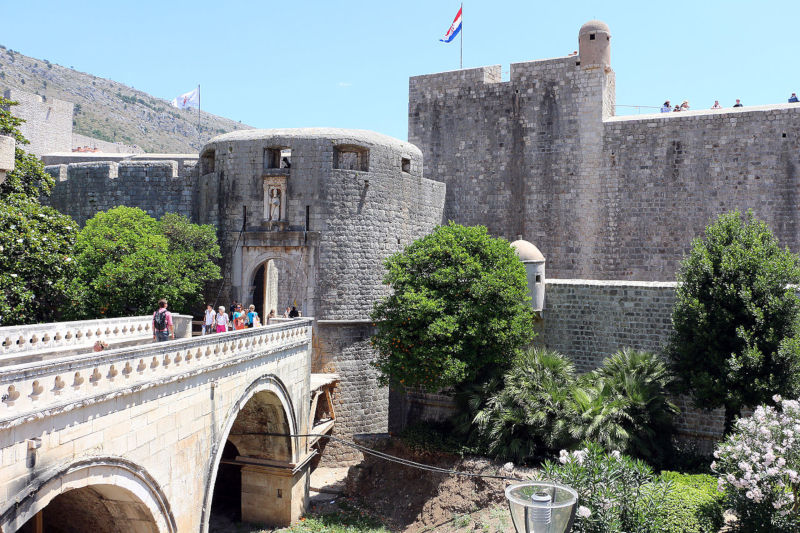 The Pile Gate is one of four gates that used to protect and give access to the Old Town of Dubrovnik. As the main entrance into Dubrovnik Pile Gate is a logical place to start your journey into Dubrovnik. To pass Pile Gate you have to cross a very scenic stone bridge. The bridge also has a wooden part, which is the drawbridge which can be pulled up in case some less friendly visitors are approaching the city. A fun fact is that Pile Gate is also one of the Game of Thrones filming locations as the entrance to King’s Landing.

Stroll over the city walls 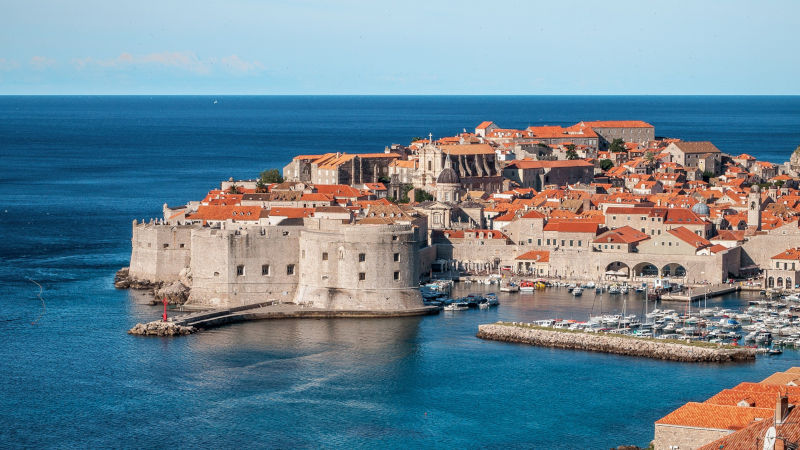 Visiting the Old Town’s walls and fortification structures is one of the highlights of visiting Dubrovnik. Touring the walls and fortifications not only provides you with some breathing space from the usually large masses of tourists below, but it’s also an excellent opportunity to get your bearings as you get an amazing up-top view over the whole place.

The defensive walls that encircle the entire Old Town stretch about 2 kilometers (6,360 ft) and have a history dating all the way back to the 12th century. Before that time Dubrovnik is thought to have wooden city walls, which were slowly replaced by stone walls that kept being expanded and added onto over the course of history. And as you cross the wall you will come across a vast network of towers, fortifications and fortresses from which you can peer over the city. The city walls are a fantastic place to take memorable vacation pictures from. 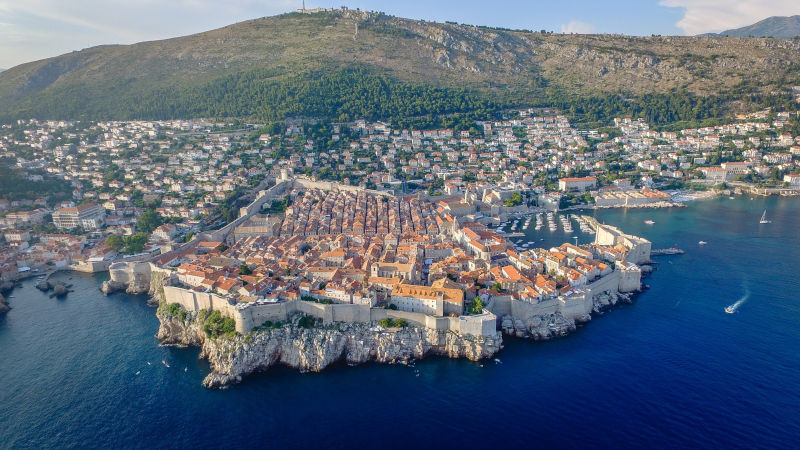 There are plenty of stunning beaches around Dubrovnik for the people like me who are interested in soaking up the sun. If swimming and sunbathing and still being able to enjoy the stunning views of Old Town’s medieval walls sounds good like a good deal, then Banje Beach is probably your best bet. Within a few minutes walking to the east of the Old Town you can find Banje Beach.

All comforts are met as you can even hire a sunbed there or have some lunch and cocktails at the nearby beach bar. While the setting is nothing short of wonderful the beach can get quite busy during the summer season. 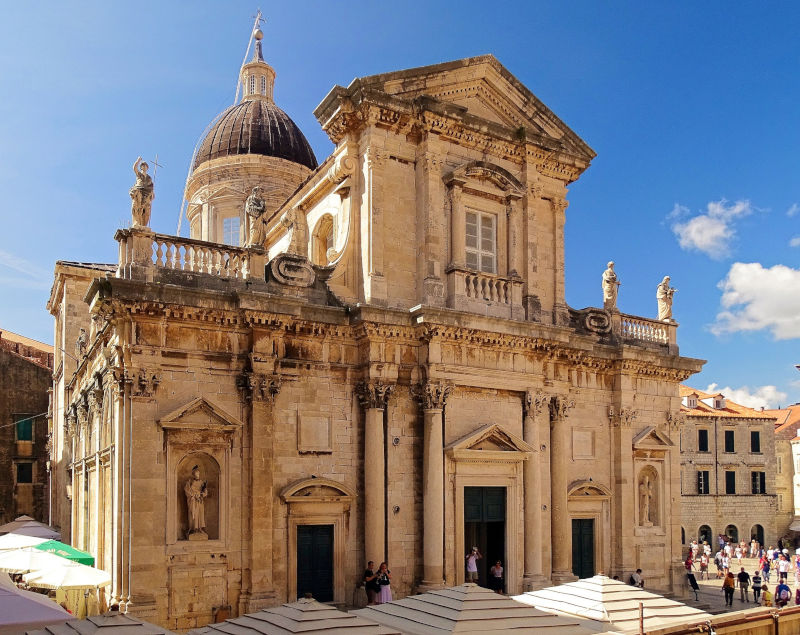 One of the must-see sites in Dubrovnik is the Dubrovnik Cathedral, which is also known as the Assumption Cathedral. This Roman Catholic cathedral is one of the city’s most representative baroque architectural sites. It’s said the Dubrovnik cathedral was partially funded by King Richard the Lion Heart of England, as when he crashed on the shores of an Island in front of Dubrovnik the locals here took him in. And as a way to thank the people he build this church.

This is certainly no ordinary church, as this seat of the Diocese of Dubrovnik contains some impressive relicts. The cathedrals side altars are riddled with stunning works of art by both Croatian and Italian artists from centuries gone by. The same goes for the main altar where you can see a beautiful work of art of the Ascension of Mary by the Renaissance painter Titian. And most notably the cathedral houses a fragment of the cross on which Jesus was crucified. 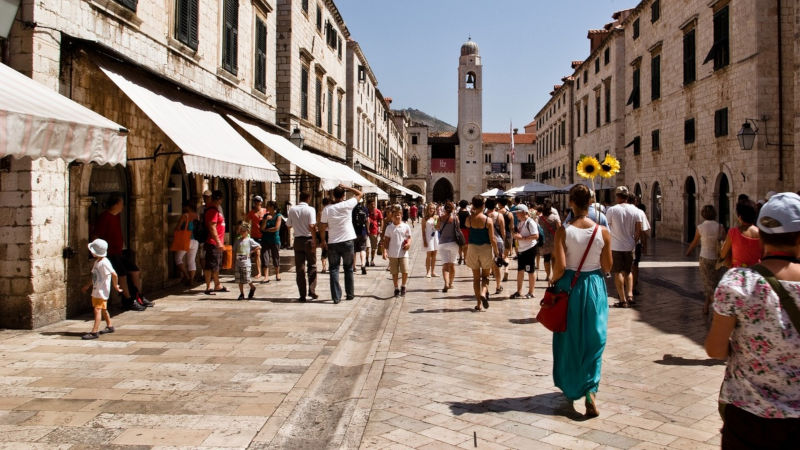 Stradun is often considered the main street of Dubrovnik’s Old Town. This 300 meters long limestone-paved pedestrian street is the ideal place to immerse yourself in the atmosphere and old architecture of the city. It is here and in Straduns many less touristic alleys that you will find fantastic places to sit down and enjoy Croatia’s wines, coffees and ice cream at the local bars and restaurants. Both ends of this historical streets are marked by a fountain and a 31 meters tall bell tower.

If you follow Stradun eastwards you end up at Luza Square, also known as church square. Here you will find some of the most prominent landmarks of Dubrovnik and cultural sites such as the Church of Saint Blaise, dedicated to the patron saint of Dubrovnik, and Sponza Palace. A perfect place to start a fabulous vacation in Dubrovnik.

Author: Monica Bennett
Filed Under: Europe
The biggest beer festivals and fairs that make Germans go nuts!
A guide to Rotterdam for the Eurovision Song festival 2021