The most curious UFO shaped architecture across the world 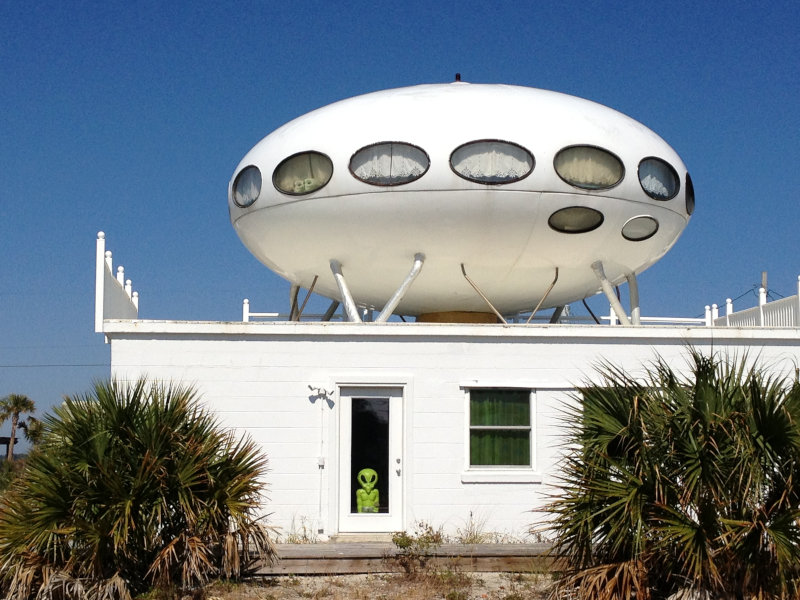 Architecture is an art by itself. It often captures the spirit of the time we live in. And since the War of the Worlds and the moon landing the vast expanse of space has been an increasingly influential source of inspiration. So in this blog I’d like to journey with you through architecture inspired by outer space.

Across the world you will find UFO landings, or at least buildings that appear like an UFO landed there. As we came across this unusual phenomenon during our travels we decided to make a list with the most curious UFO sightings across the world that travelers can come across. 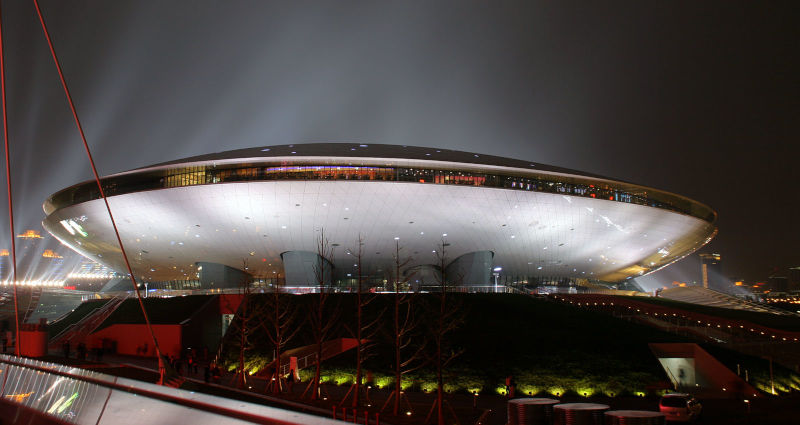 China loves their extraterrestrial architecture. One of the biggest UFO’s that has landed in China is this disk shaped arena in Shanghai. As the Mercedes-Benz arena is used to huge venue that has hosted numerous entertainment events it has become an icon among the nightlife audience in Shanghai.

Lots of international performers such as Taylor Swift and Metallica have been beamed to this arena to play for their Chinese audience. But the arena has also been home to several conventions, shows and sports matches from ice skating to the Victoria’s Secret Fashion Show. So it seems this spacecraft that appears to come straight out of Star Trek has been fully embraced by the locals. 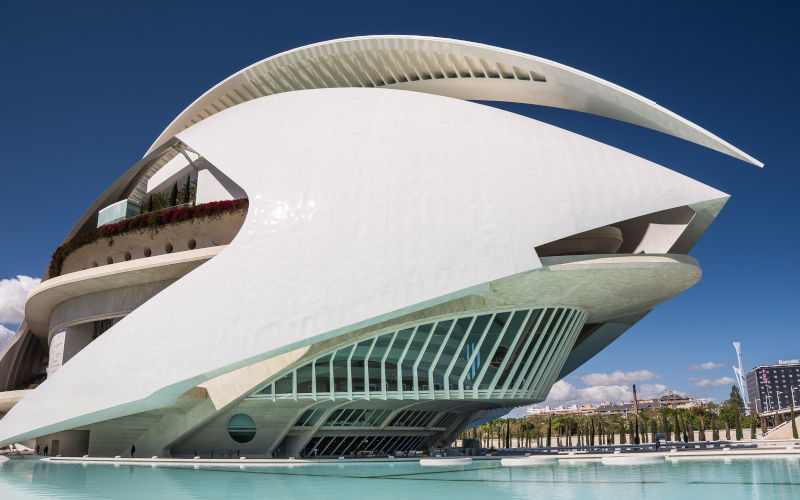 One of the defining buildings in the heart of Valencia is also one of the most exotic buildings on this list. There has been some debate whether this craft is more suitable for traveling the seven seas or the vast expanse of space, but that discussion is purely academic as it will remain stationed in the heart of the Valencia for travelers like us to enjoy for the coming years.

This unique building serves as an opera house and one of the cultural highlights of the city. A pretty tall opera house at that. Having an impressive height of 75 metres (246 ft) it’s the highest opera house on the planet, allowing it to offer a great view over the cityscape of Valencia from its decks. The open areas in the shell of the building allow the Palace of the Arts to illuminate during the night making it a majestic sight to behold. 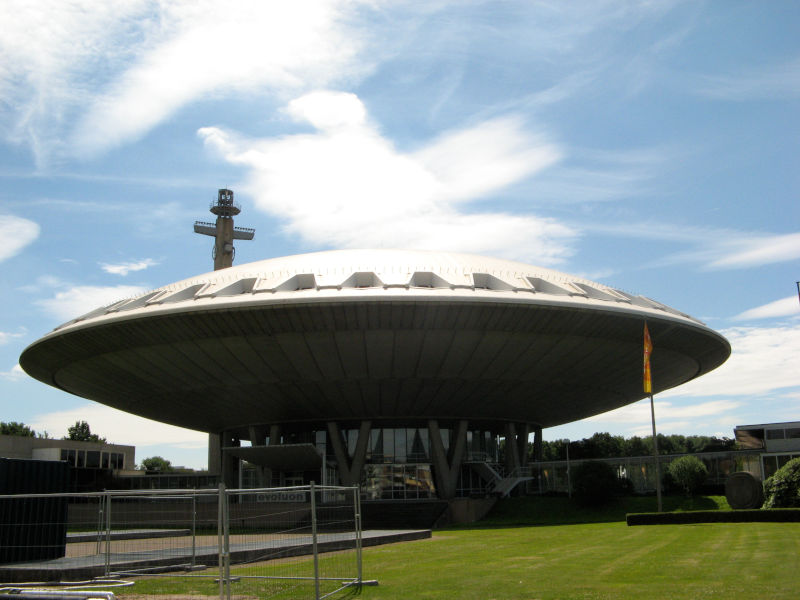 The city of Eindhoven in the Netherlands is known as the scientific and technological capital of the country. It is here that companies like Philips were born. During the cold war Philips decided to build an UFO for the city. It served as an educational science museum until 1989, when the Berlin wall fell and the cold war was over.

Currently the building is used as a pretty unique convention center, where events, workshops and occasionally even weddings are held. Because who wouldn’t want to get married in a cold war UFO?

Futuro House, across the world 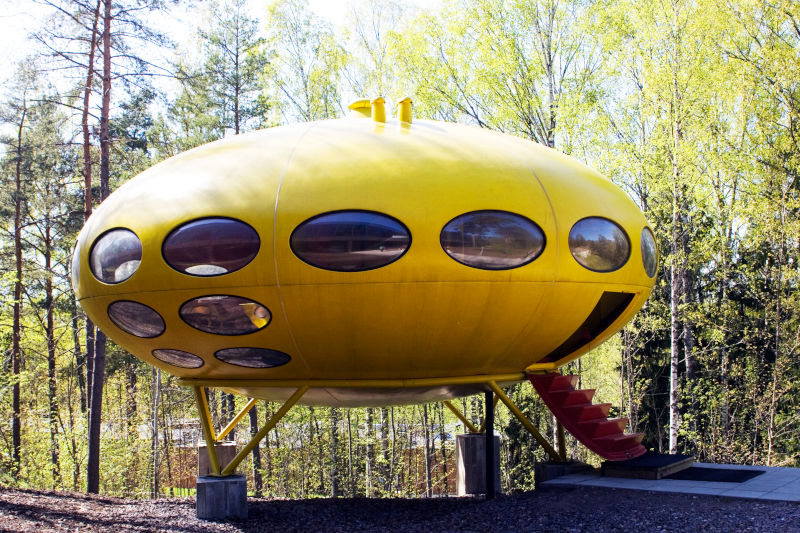 It is possible to live in an UFO. Across the world you can find Futuro houses, which are cute little UFO-shaped houses of 50 square meters. With an insanely retro design Futuro houses look like they come straight from an Austin Powers movie, which isn’t very surprising as they were built in the 60’s and 70’s. A lot of the Futuro houses were deployed by helicopter, so people have literally seen them flying across the country. So these things are actual flying saucers in every sense of the word.

The Futuro houses are currently scattered across the USA, Europe, Oceania and East Asia. A lot of them are unfortunately abandoned, but you can still check them out. Online you can even find a map where all Futuro houses are located. And wherever you are in the western world, there is always one nearby. 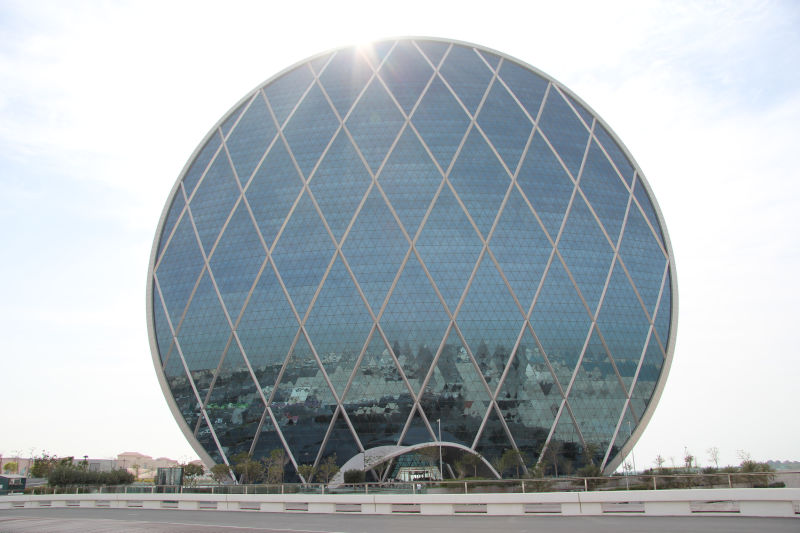 The Aldar Headquarters is a marvel of modern engineering. It’s the first round skyscraper in the world and looks like an UFO that has landed vertically. This coin shaped building stands at an imposing 110 m (360 ft) tall and has become part of the icon skyline of Abu Dhabi. This futuristic design was actually originally inspired by nature, by the elegant clam shell.

If math is the language of the universe then this super structure with a perfect geometrical shape viewing over the most precious resource of earth, the ocean, will surely be considered an architectural gem even by alien eyes. If they would land next to this building and see it that is. 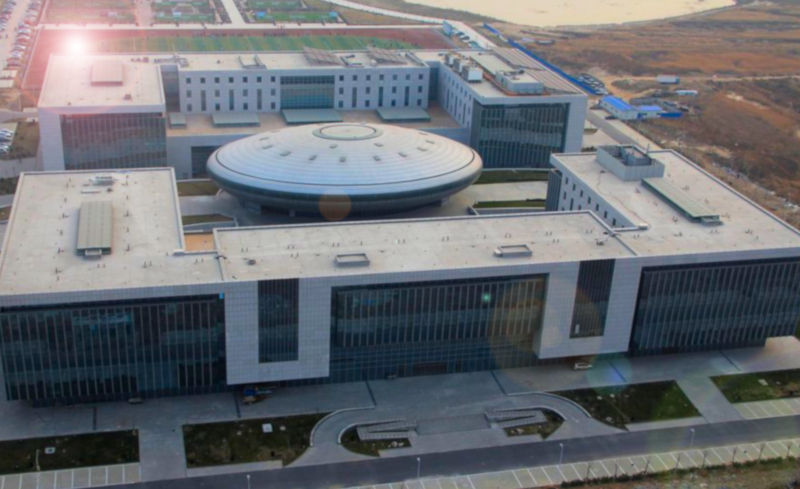 In China they have managed to capture an UFO and put it right at the heart of a Science and Technology Museum. Or at least, that’s what you would think when you look at this museum in China. Through this museum wants to show their dedication to their space program. And as you might have guessed this wonderful flying saucer offers space exhibits and and things like a 4D cinema, which adds another dimension to the story telling.

One thing is certain, if architecture tells us about the spirit of our time, then we will certainly will see more of space soon.

If you want to see more futuristic designs, then continue reading and check out our sightseeing in Dubai guide where you can see some of the most amazing futuristic projects humans are working on today.

Author: Monica Bennett
Filed Under: World
These are the top 3 fanciest city parks in the world