5 must-see attractions in Suzhou (the Venice of China) 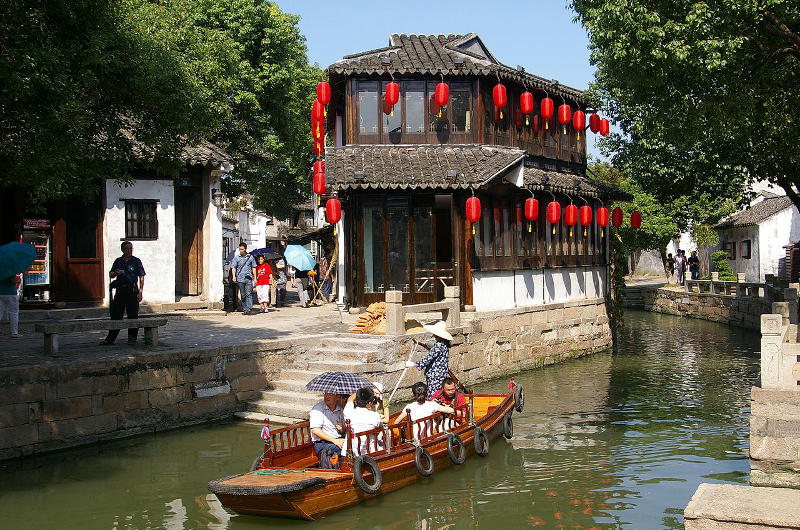 The historical village of Suzhou was known as a center for silk trade and production, and it steadily grew to the city of trade and commerce that it is nowadays with over 4 million inhabitants. Fortunately its historical center with the beautiful canals, bridges, temples and ornamental gardens are well-preserved. The historical city center is also assigned as an UNESCO World Heritage Site and attracts many tourists. The Italian merchant Marco Polo visited Suzhou many centuries ago and he described it as an impressive and majestic city. There is also an ancient Chinese proverb that says: “in heaven there is paradise, on earth Suzhou”. And because Suzhou is only about 100 km (60 mi) from Shanghai are there also many people that make a day trip to Suzhou. The most convenient way to get from Shanghai to Suzhou is by train and takes about half an hour. There are so many things to see and do in the city that is often dubbed as “The Venice of China” – because of the many canals, waterways and bridges in the Tongli area- that it is hard to decide which attractions you should visit. To help you with this choice we selected the five attractions that you must see when you bring a visit to Suzhou.

The Humble Administrator’s garden (or Zhuozheng Yuan) is with its 5.2 hectare (13 acre) the largest classical garden in Suzhou and considered as the mother of Chinese gardens. It also has become one of the most popular attractions of Suzhou. This private garden is best known for its exquisitely fine and subtle beauty and unique designs.

The garden consists of an eastern -, western – and central section. On the eastern section of Humble Administrator’s garden has is rich in dense pine- and bamboo forests, winding paths and a main building as the orchid with a half-built-above water lotus pavilion. The western section treats you to ancient and antique ornate halls in the mature style of Qing Dynasty. And the central section presents you the main and elite part of the garden. It has many scenes arranged around the “Surging Wave” Pond with beautiful pavilions surrounded by exuberant trees.

Besides the fascinating hills, the water ponds with beautiful houses, trees and flowers you will also find Chinese architecture, arts, calligraphy, carving and paintings.So a visit to this cultural heritage site – that has been in existence since 1509 – is a real treat to people that love traditional Chinese architecture and gardens! If possible you should visit the Humble Administrator’s Garden in spring when the garden is dotted with green trees and the colors of blossoming flowers. In that season there also some floral exhibitions and – festivals held in this magnificent garden.

The ancient Tongli town is another must-visit landmark located in the outskirts of Suzhou city. What makes this town exceptional is the fact that it has a system of many rivers, canals and bridges what gives it a charming water city scenery. Tongli has seven islands that are surrounded by five lakes that are fed by fifteen small rivers lanes that criss cross the town. These features have resulted into the nickname Venice of China, or the Oriental Venice.

The rich Chinese cultural history can also be discovered by paying attention to the variety of styles in ancient bridges that connect the seven islands in majestic ancient-Chinese architecture. The three most-famous bridges are Taiping (tranquility), Jili (luck) and Changqing (lasting celebration) and represent blessings. People walk across these three bridges to pray for health and happiness when they are getting married, after the birth of a child and when they celebrate a birthday. The oldest bridge in Tongli is the Siben (reflecting origin) bridge and was built during the Song Dynasty (960-1279).

Along the riverside are many houses and temples from the Ming (1368-1644) and Qing Dynasties (1368-1911). The flying eaves, well-groomed gardens and carved windows make the residential houses are a must-try during your vacation. They were originally built as temples and later converted into hotels. This creates a beautiful blend of ancient Chinese architecture with modern hospitality. 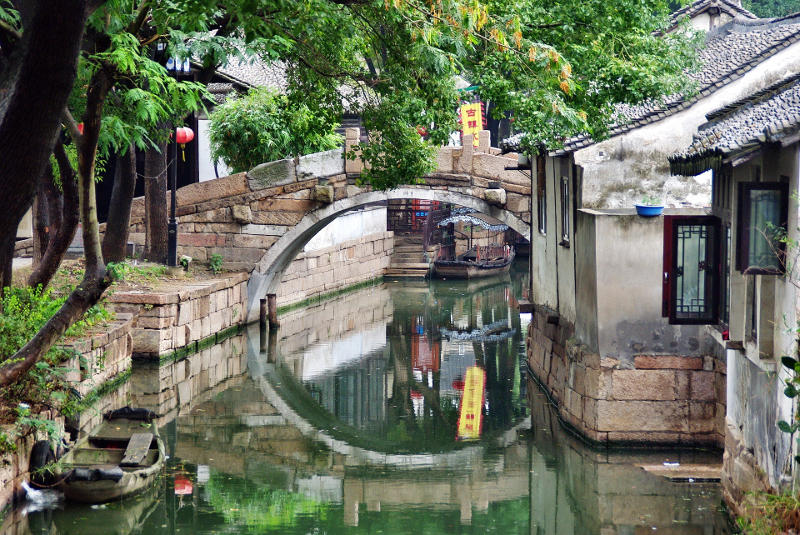 This garden is another tourist destination rich the in Chinese culture and ancient heritage, and is located just outside the Changmen gate in Suzhou city. The Lingering garden (or Liu Yuan) was built in 1593 during the Ming Dynasty. It is next to the Summer Palace in Beijing, the Mountain Summer Resort in Chengde, and the Humble Administrator’s Garden one of the four most famous gardens in China. The 2.3 hectare (5.7 acre) garden has one of the most stunning natural landscapes and beautiful Chinese architectural works. In this garden do the buildings, trees, ponds and flowers blend harmoniously with their surroundings. The Bonsai trees are one of a kind, almost not ever seen anywhere else in the world.

The gardens are divided into four distinctly themed sections; East, Central, West, and North that are connected by a 700-meter long corridor, on which gorgeous calligraphy is curved on the stone walls throughout the stretch.

Its magnificent halls and striking architecture in the East, West and North sections are perfectly combined with the corridors, hills, rocks, and water and portray the beautiful Qing style. The garden is so exquisite that UNESCO recognized it as a world heritage site in 1997.

The Hanshan Temple (or Hanshan si) means Cold mountain temple and is a Buddhist temple and a monastery. This ancient temple is located in Fengqiao in the west of Suzhou and is believed to have been founded during the Liang Dynasty (502-557). It is one of the most renowned Chinese temples. The temple became well known after poet Zhang Ji wrote a famous poem called Mooring to the Maple Bridge at Night after passing the temple on a small boat.

On the site are the Grand prayer hall (with a statue of the Buddhist patriarch Sakyamuni), the Sutra-collection building, the Bell tower, the Fengjiang pavilion, the Tablets Corridor and the symbolic building of the temple, which is the 42 m (138 ft) tall. Puming Pagoda. On New year’s eve it has become a tradition that many tourists come to listen to the one hundred and eight bell tolls of the Hanshan Temple.

When you walk on the beautiful Maple Bridge you can enjoy the exceptionally attractive scenery of the Jinghang Grand Canal; the longest man-made ancient canal in the world.

A trip to Suzhou would not be complete without checking out the Suzhou museum. Enjoy the beautiful ancient Chinese art, calligraphy, handicraft works, celadon and ancient Chinese paintings. The museum has a collection of more than 15,000 pieces. That is not all, it also possesses more than 20,000 rubbings of stone inscriptions and over 70,000 books and documents. Visitors can also tour Prince Zhong’s Mansion.

The museum was founded in 1990, but the current building was opened in 2006 and designed by Pritzker Prize-winning Chinese-American architect I.M. Pei. The museum has a surface of over 10,700 sq. m. (115,000 sq. ft.) and the halls are respectively themed on the Treasures, Pagoda Relics, Elegant Life Style, and Paintings and Calligraphies of Wu Kingdom. There are also other exhibitions from e.g. the paintings from Ming and Qing dynasties, the Pearl Pillar of the Buddhist Shrine, the Seven Pieces of Painting from the Yuan dynasty and national treasures like the celadon lotus-shaped bowl which both attract many visitors. The art pieces are exquisitely exhibited in the museum’s modern halls in a way that they are blended with the classical garden architecture.

Because the Suzhou Museum is adjacent to the Humble Administrator’s Garden it very attractive to combine these visits.

Author: Monica Bennett
Filed Under: Asia
When in Japan make sure to visit Hakone (a wonderful town next to mount Fuji)